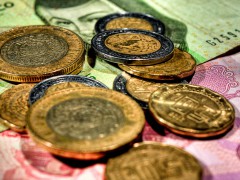 “Joder, que nosotros nos hemos venío porque allá no hay trabajo…” (F*** man, we came here because there are no jobs there…) answered the Spanish couple to my inquiries about their origin and their visit to the beautiful Mexican beaches of Los Cabos, Baja California Sur. I had finally met one of the 55,000 Spanish people who escaped in 2012 to Mexico from the harsh conditions generated by the economic crisis in many European countries.

In the middle of the storm there is an oasis called Latin America, where a 25% increase in per capita GDP (2002-2011), sustained growth of around 3% to 5% per year, and 73 million people rising out of poverty during the last decade have led us to believe that it is possible to recover from the current economic turmoil. In fact, it is expected that Mexico will become the largest Spanish speaking economy before the year 2017.

Nevertheless, simply watching and waiting for Mexico’s economy to boom won’t be enough to make Mexico’s goals come to fruition. We need to learn from the context of the crisis and take care of external debt – which has grown quickly in the last six years – as well as optimize current political processes, activate mechanisms against inequality and work to prevent negative financial scenarios.

According to the OECD’s Social Spending During the Crisis (2012) report, since 2008 the percentage of GDP destined for social spending (i.e. unemployment, housing and cash benefits) has rocketed in the European countries most affected by the crisis. This is due to ever larger numbers of people requiring help and the shrinkage of total government revenue.

In contrast, Mexico’s social spending amounts to only 8.2% of its GDP compared to an overall average of 22.1% in OECD countries. Mexico’s budget is mostly focused on services in social support. On one hand this serves as an indicator of how the crisis hasn’t affected so many Mexicans locally (compared to the developed world). But on the other hand it represents a void in investment required to achieve higher levels of equality via responsible social investments.

It is important for governments to choose how to spend their budgets carefully and to always remember that middle and low-income groups’ demands normally tend to reflect a preference for immediate benefits rather than future macroeconomic gains. Recently in Brazil, millions of people went on to the streets to complain about high taxes, poor public services and an incredibly high cost of living. In Mexico we haven’t seen any such protests yet, but the circumstances are perfect for the movements to begin.

The current uproar in Brazil must serve as a warning of what may continue to happen if the government doesn’t engage in more responsible management of its spending. It could be possible to implement a moderated type of austerity based on the idea of crisis prevention through the optimization of internal processes, thus increasing government funds and providing greater opportunities for spending on social initiatives projected towards the future – such as education, a better healthcare system, and job creation.

This way it would be possible to maintain the current level of social services while generating a monetary margin for more future-oriented social spending. One example of this is the 5% cuts in the salaries of high and middle level government workers signed at the beginning of this year.

Another area of opportunity is the prosecution of corrupt government officials, which began this year in Mexico. First the imprisonment of Elba Esther Gordillo – notorious  for her long career of exploiting the Education Labor Union and stealing millions and millions of dollars from it – surprised the Mexican people tired of 20 years of lies. Then, June saw the prosecution of the former Governor of Tabasco, Andrés Granier – who boasted in a video about his 1,000 shirts, 300 suits, 400 pants and 400 pairs of shoes before retracting this by claiming he was drunk at the time.

Clearing up corruption, adequate follow-up to government salaries, and optimization of process flows in government organizations such as PEMEX (Mexican Petroleum) and its healthcare system are just some of the possible first steps to start closing the gaps through which significant amounts of money are lost. With such extra savings, it would be possible for the government to spend more on social development and equitable policies that lighten current social tensions, generate more stability and attract more investment.

The odds today are in favor of the developing world. Mexico must be really careful with its economy, strengthen its processes, fund more future-oriented social initiatives and maintain its recently acquired habit of healthy finances. As long as the country continues to experience these levels of growth, more and more immigrants will continue to arrive while the developing world tries to catch up with its developed counterparts. It turned out that the Spanish couple I met during my vacation has lived in Mexico City for two years now, and it seems that they aren’t planning to return to Europe anytime soon.

Polanco, one of Mexico City´s richest zones. Picture available on Flickr by rutlo.