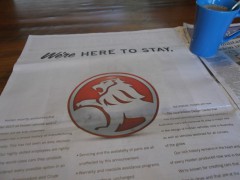 Globalisation is still a concept not fully felt by many Australians, cushioned as we are by strong domestic industries such as manufacturing and mining.  Geographically disconnected from the rest of the world, we are more used to seeing the negative effects of globalisation such as skyrocketing unemployment, tumbling property markets and abysmal poverty rates, playing out on our television screens rather than on our borders or our streets.  Brasilians, Thais, Portuguese and Mexicans are just some of those who feel the direct impacts and complexities of globalisation far more keenly than any average Aussie does.

Since the introduction of an ‘open door policy’ for international markets in the early 1990s, Australians have benefitted greatly from globalisation. They now have one of the highest standards of living in the world, including excellent medical care, stable banks, high wages, access to technology, low unemployment and a world class education system. Globalisation though, is not without its downside, its discontents, as Joseph Stiglitz so famously wrote.  A heavy reliance on strong domestic industry can leave Australia vulnerable and without the cushioning of these industries, when the forces of globalisation hit, they hit hard in Australia.

The Australian manufacturing industry, so long the backbone of the economy and so deeply entrenched in the national psyche, took another hit recently with the announcement that Holden will cease production in 2017, resulting in 2,900 direct job losses.  Holden have pulled out because, quite simply, without government subsidies, producing cars in Australia is too expensive.  Wages are too high compared with Asia, the local market prefers cheaper imported cars and Holden Australia does not have an exclusive model which might have been able to retain a smaller manufacturing workforce.  The announcement follows Ford’s decision to pull out in 2016 and experts now predict Toyota will depart in 2018.  Holden’s announcement, while met with much political hot air, is simply the latest in a steady decline in Australian manufacturing.  Whitegoods and textiles businesses have been quietly eroding for decades, Ansett Airlines famously dissolved in 2001, Mitsubishi bid sayonara in 2003 and SPC Ardmona has been souring since 2008.

Australian manufacturing now stands at 7 per cent of GDP, compared to 25 per cent in the 1960s.  For a country that has grown up ‘making stuff,’ what does the future hold for Australia?  We will be loathe to compromise our hard earned standard of living and with unions still holding much clout we will simply be unable to compete with Asia and India in the long run.

Despite the decline in percentage GDP, the manufacturing sector remains a crucial part of the Australian economy, as it does in any developed economy.  Australian manufacturing employs close to one million people, more than the mining industry, while the automotive sector is responsible for a large number of indirect employment opportunities, through spare parts, suppliers and servicing.  It is widely acknowledged that Australia’s economic future needs to include manufacturing.  The Productivity Council of Australia highlights that manufacturing, ‘…is the sector that contains and advances the skills and capabilities that prescribe membership in the ranks of the advanced nations of the world.  For research and innovation, manufacturing provides the essential ground from which future streams of products and incomes can emerge.  Whatever form the economy of the future may take, manufacturing will provide the enabling foundation for it.’

With Australia being a ‘high cost nation’ we need to make what others do not make, we need to make it well and make it cheap or exclusive,if we are to continue to maintain a competitive and sustainable manufacturing industry.

One idea is to run with what we do well and exploit our abundant natural resources – though in a more sustainable way than we do at the moment.  Australia is an innovative nation when it wants to be, when it is led to believe it can be.  Australia was involved with the development of modern motor vehicles, and we boast the T Ford among our national icons.  We have also played large roles in the field of medical research, offer high quality university education and ‘punch above our weight’ in world sports.  Australia is also home to some of the hottest and windiest parts of the world and has more accessible coastline than any other country on earth.  This is where we should be focusing.

With only a fraction of the natural resources of Australia, Germany has set a blazing trail in the development of renewable energies.   By 2030, some in Germany hope to have 100% of their electricity produced from renewable sources.  China has also caught on and is rapidly developing an export market worth billions of dollars.  If Australia wants to continue to ‘make stuff,’ renewable energy is the obvious answer.  Prime Minister Tony Abbott, a self described ‘climate sceptic’ resistant to green technology and politics, has acknowledged, ‘…cheap energy ought to be one of our comparative advantages…this country ought to be an affordable-energy superpower.’  The Australian public has proved more than supportive of a move to green energy, with both NSW and WA governments ‘forced’ to axe their solar panel rebate schemes because they were ‘too popular’ and a recent poll showing high levels of support for wind farms.  Furthermore, current fossil fuel energy systems are already heavily subsidised with money that would be better spent in the research and development of green energy. The Australian public is enthusiastic for manufacturing jobs and in Germany, the ‘greening’ of the economy has proven crucial to the country becoming one of the world’s strongest economies.

In another century or so the world is predicted to have run out of or almost run out of oil and other fossil fuels.  With much of the developed world still squabbling over the ideologies of green energy, now is the perfect opportunity for Australia to once more be at the forefront of manufacturing, by developing and producing renewable energy products to sell to the world.