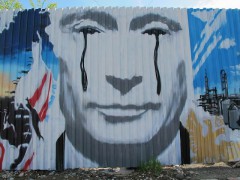 Russia’s steady growth in GDP and its 5% unemployment rate could make countries like Greece and Spain green with envy. The Russian economy surged ahead from the mid-2000s, seemingly immune to the shocks of the 2008 economic crisis. Foreign corporations kept pumping money into a country whose high levels of corruption were as well known as its rapid returns. Russian Prime Minister Dmitry Medvedev estimates [ru] that approx. 50 billion dollars of direct foreign investment flowed into the Russian economy in 2012 alone. Yet does this economic prosperity bring any benefits for the people? Where does the wealth go?

Austerity? Never heard of it!

It was rising oil prices that prevented the Russian economy from collapsing under the onslaught of the financial crisis. However, such a strong dependence on natural resources hasn’t been beneficial to all Russians. Unlike the UAE or Saudi Arabia, Russia hasn’t invested oil revenues in projects to improve the lives of all Russians. On the contrary, Russian villages have been left to languish with their archaic soviet-era infrastructure of dilapidated roads, and medical services in dire need of funding. Russia’s far flung communities yearn to get a slice of that fabulous oil wealth from which others of their fellow countrymen have benefitted.

European-style austerity measures have never been introduced in Russia. Both local and regional governments haven’t implemented any deep cuts in spending, yet the fruits of steady economic growth are not translating into people’s daily lives. What’s the point of having high revenues from natural resources when the nation as a whole doesn’t benefit from them?

The Soviet era infrastructure allowed companies and oligarchs to exploit natural resources with scant regard for investment in their development and renovation. Yet these days of plenty now seem to be drawing to an end as shaky economic growth and endemic corruption destroy the foundations of Putin’s stability. Wealthy people now prefer investing their oil and gas revenues abroad thus increasing the outflow of capital, and the federal budget will soon feel the pinch of insufficient revenue from oil due to the increased cost of oil production and the required technological renovations.

Austerity for the people

Let’s look at the healthcare sector as an indicator of national wellbeing. Getting proper medical attention in Russia is nearly impossible. According to the European Heart Network, Russian men under 65 are three times more likely to die from coronary heart disease than Frenchmen, whereas Russian women are sixteen times more likely to suffer from heart diseases than Europeans.

The death rate from coronary heart disease (CHD) is up to six times greater in Russia than in Western Europe (Source: European Cardiovascular Disease Statistics. 2012 Edition)

Coronary heart diseases (CHD) cause around 200,000 deaths annually among people aged 15–69 in Russia.  At the same time, Spain, a country with a severe budget deficit and a debt-fueled economy, keeps investing enough money in its healthcare system. Spain has a CHD death rate of 43.5 per 100,000 people, while Russia has a rate of 296.7 which puts it among the top ten countries with the highest rates of CHD deaths together with Uzbekistan and Afghanistan. This is alarming enough but hardly surprising since in 2010 Russia devoted around 6.5% of GDP to healthcare, while EU member states allocated around 9.0%.

Healthcare for the lucky few

Several weeks ago the eponymous small arms designer Mikhail Kalashnikov was hospitalized with cardiovascular issues. The Russian Ministry of Emergency Situations sent [ru] a special plane to transport the 93-year old designer to Moscow for the best medical assistance from the city of Izhevsk, a regional capital in the Urals. This city of over 600.000 people doesn’t have a proper cardiovascular center. Would any other citizen of Izhevsk be as privileged as Kalashnikov? I highly doubt it.

At the other end of the scale, Alexey Sachkov, a surgeon at the N.V. Sklifosovsky Scientific Research Institute of the Emergency Institute in Moscow appealed for help from the online community. In his blog he wrote [ru] about how patients in the intensive care unit suffer from the lack of essential medical equipment, and asked people to donate non-stick bandages and antibiotic ointments for patients with skin burns. This cry for help attracted broad media coverage and prompted many people to donate money and medical supplies. It is still unclear how a top Moscow hospital has insufficient quantities of bandages.

Even though Russia will host the winter Olympics in 2014 and the FIFA World Cup in 2018, Russian citizens have to struggle to cope with the bleak effects of insufficient social funding. For the last 20 years, they have been living in the grip of austerity proper, even though actual austerity measures have never been introduced officially.