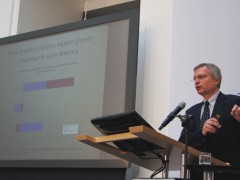 Since the end of the 1970s, the International Monetary Fund (IMF) and the World Bank have advised developing countries to adopt pro-growth policies, supposed to be a vector for jobs and well-being. But in many cases, these reforms have led to growth without jobs.

The English economist John Williamson named it the Washington Consensus. A set of reforms, which the IMF and the World Bank sponsored and considered basis of an efficient, growth-orientated market economy, which fosters entrepreneurship, employment and thus well-being. This included opening to international trade, market liberalization, deregulation and privatization of the public sector, decreasing state intervention, etc. These reforms where usually put on the agenda of developing countries in difficult financial situations once they sought aid in form of cheap credits at the IMF.

Over the years, this set of policies has been increasingly criticized for their mixed results. The most prominent critic of the Washington Consensus, who emerged at the end of the 1990s, is Joseph Stiglitz, himself a former chief economist of the World Bank and consultant forthe US government, who insisted on the “dark side of globalization”. With the outbreak of the financial crisis in 2007, many experts reconsidered the Washington Consensus, to the point that now it can hardly still be termed a “consensus”.

The “Employment and Development” conference of the German state-owned KfW development bank on March 15 in Berlin was a good opportunity to discover to which extent the Washington Consensus has left the agenda of the development sphere.

Indeed, the second biggest development bank in the world, had invited as a keynote speaker Professor Dani Rodrik (@rodrikdani) from Harvard University, who presented how over-liberalization of some developing countries has been a handicap to their growth, but also to their employment level. As a panel participant put it: “Mr Rodrik’s ideas should have been more listened to in the years before the crisis”.

Comparing Mexico, which implemented most of the Washington Consensus policies, and Brazil, which kept a more heterodox approach, from the 1970s to the 1990s, Rodrik showed how the first was more vulnerable to international crisis and didn’t reach higher levels of growth than Brazil, even though it had full, tax-free access to the US market. The same applies to the reduction of poverty.

Furthermore, describing the evolution in African countries, he showed that in some cases the achieved growth has only been smoke and mirrors. This growth hasn’t lead to the achievement of the IMF’s development goals such as “to promote high employment and sustainable economic growth, and reduce poverty”. On the contrary, these countries are experiencing “jobless growth”.

Jobless growth keeps wealth in the hands of a minority

One example : Tunisia had a growth rate of 3,1% in 2009 and in 2010 and was believed to be on a good path of reform implementation, but the unemployment rate never went below 18%. The persistence of this situation, with the fruits of growth largely unreachable for the youth, help to explain why uprisings in Tunisia sparked the broader Arab revolutions. In 2008, after talks with Tunisian president Zine el-Abidine Ben Ali, Dominique Strauss-Kahn, IMF director, stated : “Our discussions also convinced me that Tunisia is making impressive progress in its reform agenda and its prospects are favorable.”

Another example is Nigeria, whose GDP grew 7% each year from 2009 to 2011. During the same period of time, this oil-rich country saw it’s unemployment rate grow from 19,7% to 23,9%. According to the IMF, Nigeria is on the right way to ride the global economic downturn thanks to “booming oil prices and an ambitious reform agenda.”

Rodrik pointed out that countries that have applied reforms to rationalize their economy have experienced growth, but are unable to distribute this wealth among their population. On the contrary, this new wealth stays in the hands of a very small labor force which works for services or for the sale of natural resources, the most productive parts of the economy. People working in the agricultural sector and former civil servants, who have been dismissed due to the liberalization of the public sector, haven’t the skills required to be employed in the 1% most productive part of the economy.

This line of thought brings us to the assessment that growth shouldn’t be per se the goal of development policies. The focus should be put on good growth, which produces sustainable employment across society. And that isn’t possible with a complete trade liberalization, which leaves no ways for an economically poor country to compte in the global economy. It isn’t a coincidence if Rodrik mentioned China, not the most free-market country, as one which managed to enter the international market in an intelligent way, assuring growth, nearly full employment and poverty reduction.

Should we still believe the IMF?

The reforms advised by the IMF and the World Bank brought growth, but without them some countries could have done probably better. If it brought growth, it didn’t always bring jobs. Liberalization served a minority, creating difficulties for a majority. Today, these assessments are shared by many scholars and institutions.

Due to the crisis, the positions of the IMF have changed, in particular through the impulse of its new president Christine Lagarde. But the credibility of the institution stays severely put in question. Why should governments believe in the new course, if the last one turned out to be wrong?

At the conference, a member of the panel told me privately after the official discussion that countries shouldn’t follow the advice of the IMF, if they believe they would go against their interests. But is it so easy? Politically and economically weak countries aren’t able to resist the pressure of big economies and the IMF.

In order to consolidate the IMF’s credibility and to be sure that its policies are sufficiently adapted to the situations which econonomies are facing, the civil society and the judicial system should be allowed to investigate the international organization, in order to make it accountable if the suggested policies have led to counterproductive results.