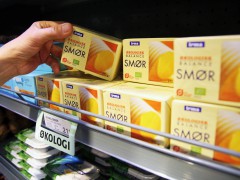 Danish media are overflowing with news and views on the recently-instated ‘fat tax’, which increases the cost of food products containing saturated fats. Being the first of its kind, the Danish fat tax prompted headlines around the world when it was proposed in October 2010 and took effect in October 2011. Now, as Danish food industries, population and politicians have turned sour on the tax (and its younger sister, the ‘sugar tax’), its future is up in the air once again. But current bargaining between parties in parliament makes it hard to predict a definite outcome.

Retail prices of butter in Denmark have increased significantly (more than 10%) with the introduction of a fat tax. Photo: Asbjørn Kristensen Høgsbro

Fat tax, sugar tax – it sounds like someone in Denmark has mixed up the national budget with a recipe for pound cake. But let’s begin with a bit of proper perspective. It is by now a well-established fact that non-communicable diseases (NCD) have become the leading cause of deaths globally. According to a 2011 WHO report on NCDs, they account for 63% of deaths worldwide and over 70% in all high-income countries. Of the NCDs, cardiovascular diseases and diabetes are the biggest killers in every single country of the world – closely related to the behavioral risk factors of over-eating and physical inactivity. While the average levels of cholesterol and blood pressure have generally been stabilizing or improving in high-income countries, average BMI is on a global rise.

Health care professionals and policymakers are scrambling to come up with new ways of addressing this problem. Apart from better detection and treatment of complications, promotion and prevention is in the high seat, as the things that kill people today in the developed world are increasingly related to lifestyle and behavior. But what to do?

In Denmark, where recent national statistics show that half of population of 5.5 million is overweight and almost a seventh is obese (putting it approximately at the EU average), promoting a healthy and modest diet is a top priority. Despite the Danish tradition of cycling everywhere, life expectancy in Denmark is in the lower end of the ranking of developed countries (likely because of the Danish traditions of drinking, smoking and eating fat), and something needs to be done. To this end, the former centre-right government, with support from the parties now constituting the current centre-left government coalition, passed an extra levy on fatty foods in the spring of 2011 – joining the internationally more common sin taxes on alcohol and tobacco. These are examples of so-called Pigouvian taxes aimed at correcting the outcome of a market with negative externalities.

Implemented in October 2011, the national fat tax is an extra charge on food products containing more than 2.3% saturated fat. It was part of a package of national health policy recommendations promoted by the Forebyggelseskommisionen (a national health promotion commission) in a substantive report from 2009 and spurred great international interest by health care professionals who were eager to see the results of such a tax.

The extra charge amounts to 16 kroner ($2.60) per kilogram of saturated fat. The Danish Agriculture and Food Council estimated extra spending of 1,000 kroner yearly for an average Danish family if they continue to eat the way they did before the fat tax. The hope with the tax, of course, is that they will not do that, but instead eat less fatty foods – but at any rate, the tax puts about 1.2 billion kroner ($196 million) every year in the unfilled coffers of the Danish state. Not a bad side effect for an innocent public health initiative!

Passed at the same time as the fat tax, but not set to apply before January 1, 2013, was a similar tax on sugar. This tax is expected to generate 1.3 billion kroner ($212 million) in revenue. The revenue from the sugar and fat taxes now appear to be more central to the political debate than the effect on public health.

For a small country known for its buttery pastries and high taxes, the fat and sugar taxes may seem quite fitting in a self-flogging kind of way. But for Danish food industries and retail, it’s anything but fitting. They have been complaining since talks of the tax opened in parliament about two years ago that such a burden on food producers would result in loss of business revenue, production, and jobs in Denmark (2.400 jobs, according to Danish Agriculture and Food Council, representing Danish businesses). The reason: an expected increase in cross-border shopping, especially in Denmark’s big southern neighbor Germany, where food and drink is a lot cheaper. Other ‘sin taxes’ on especially alcohol make it attractive for Danes to do their shopping for beer, wine and liquors in Germany. Deloitte estimates that 181 million liters of beer and 220 million liters of soft drinks cross the border each year.

Carlsberg, the biggest Danish brewery, sponsoring advertising for ‘border shops’ on the German side of the border. Photo: Asbjørn Kristensen Høgsbro

The nature of the tax also makes it very cumbersome for small food producers to administrate, straining them unnecessarily. According to the Danish Chamber of Commerce, the fact that each ingredient is taxed individually results in ridiculous cases of for example a puny 4.60 kroner ($0.75) fat tax charge on a container of 6,000 cans of jalapeno peppers or 128 kroner ($21) tax on 16 tons of prunes. Time is wasted administering these charges, and for no good reason.

Consumers, while originally somewhat tolerant of the fat tax, have now felt the rise in prices, which has in some cases even been increased by the retailers for an extra profit. The story of shrinkage of butter packages and other daily fatty foods received a lot of media attention, and also added to the bitterness amongst Danish consumers. For the upcoming sugar tax, new numbers show that almost half of consumers are willing to accept a higher price for sugary soft drinks, while less than five percent find higher prices on sweetened yoghurts and jams fair. The sugar tax, as it is designed to take effect, doesn’t differentiate between these categories of products – sugar is simply taxed by the gram.

This Danish gentleman combined a family vacation to the south of Europe with some shopping – cans of beer, brewed in Denmark but sold much cheaper in Germany. Will he bring back cheese and bacon in the future? Photo: Asbjørn Kristensen Høgsbro

Preliminary numbers show a slight change in consumer behavior when it comes to fat – but seemingly not the desired one. Consumers have become more price-aware and picky – but will today pick the cheaper product, not the less fatty one. However, it is still too early to learn anything very substantial from the effects of the tax.

Even among public researchers there is much discussion about the fat tax. Other sin taxes on alcohol and tobacco have great support from academic circles, but researchers disagree on the effects of saturated fats. In other words, it may not have been the best place to start a taxation-driven public health effort – taxes on sugar in drinks or salts are considered by many researchers to be more effective – both of which would also be easier to bring to successful realization. But at any rate it must be realized that what works for tobacco and alcohol does not necessarily work for food products as well.

For all the reasons above, naturally, the political parties in the Danish parliament have turned their backs on the taxes on fat and sugar that they passed with a large majority little more than a year ago. Since the passing of the tax laws, the government power has switched from centre-right to centre-left. But Denmark’s political history is one of coalitions forming minority governments, and just as cooperation across the middle of the political spectrum was needed for the passing of the tax laws, so would it be necessary for the repeal or reform of the laws. So now the situation is such that even though most political parties in parliament are willing to negotiate repealing the taxes, the bargaining positions do not allow for an easy solution. Even the secretary of taxation, Thor Möger Pedersen, feels that the taxes should be eliminated.

The reason for this, and a major point of criticism, is that the taxes were as much a clever solution to fill a gap in the national budget as a public health project. If the taxes were to be abolished, the money would have to be found someplace else, and that is no easy task in these times of economic strife, not even in reasonably well-doing Denmark.

So here they are, the fat and sugar taxes of Denmark, hanging in an ungraceful limbo between this world and the world of failed and rejected policies. And they shall stay there at least until the members of Danish parliament return from their summer break on the 2nd of October.

What can the rest of the world learn from this mess so far?

The question of whether or not the taxes have the desired effects on public health cannot yet be answered – and the “experimental treatment” may end before public health researchers across the world can learn anything substantial on the specific effect of taxes on foods. This is a shame. But one thing can be learned from the whole Danish mess: nothing good comes out of bad policy design – the criticism from Danish industry and retail is indeed very convincing. And the fact that tax revenue and public health policy have been mixed together in such an unfortunate fashion has clouded the public health aspects of the taxes and allowed for a complete focus on the fiscal aspects. Had the taxes been better designed, or accompanied by a similar decrease of the VAT on healthy foods, the picture would be different.

Researchers writing in The Lancet agree that ‘tough action’ is needed to fight obesity, and this includes taxation as a tool. But politicians in other countries have so far been deterred from going down the same road as Denmark – although French authorities in January this year passed the legislation for taxes specifically on sugar-sweetened sodas, a more focused and modest strategy which would seem more realistic and practical. This may be the best first step of a long way to go for many other countries, suffering similar troubles of obesity.

Writing my master's thesis in political science at the University of Copenhagen. Previously worked and studied in New York and Cologne. Have a look at my profile here: http://dk.linkedin.com/in/asbjoernkhoegsbro.