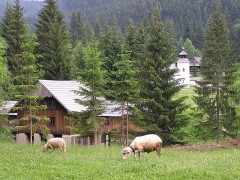 Strategic lessons about how globalization works are part of the daily entertainment program in many Slovak pubs. If you don’t have the chance to visit them personally – although, trust me, Slovak beer is really nice – here is short taster.

Listen in to any round of regulars setting the world to rights round a pub table and you might well hear something like this: Globalization is designed to concentrate more power in the hands of big fat cat bankers. Western politicians are only concerned with the interests of the banking lobby. States and people will end up in permanent debt. To increase profits, manufacturing jobs are moved to cheaper third world countries. Trapped in the middle of globalization, Slovakia gets the worse of both worlds: corrupt politicians are blackmailed by their EU mentors in distribution of EU funds.

This  discussion has now moved beyond pubs: according to a recent survey 56% of Slovaks believe that their country is controlled by international financial groups.

Everything looks clear, straightforward and unstoppable until the moment when China appears on the scene. Everyone believes that China is the one exception where the bankster clique has no chance.  Yet people also fear that one day the Chinese will buy up the world completely.

How to deal with it

There is little chance to change anything in these pessimistic, often exaggerated views of regular people. But “fortunately” we have another kind of universal expert, one who urge us to return back to the agricultural way of life which will bring us self-sufficiency.

No kidding. Even the former vice-president of the central bank – now head of an obscure relict of 19th century nationalism funded by the state budget –  recommends [sk] this as a way to achieve higher employment.
Hopefully one day, this great thinker will be satisfied with his life in an isolated farmhouse, without wasting public money sitting in a nice office preaching such a lifestyle.

Psychology is not mathematics. Poll results are often a matter of phrasing the question with the least possible bias. Another survey [sk] shows that 57% of Slovaks tend to think that the EU is protecting them against the negative impacts of globalization.

This is why I think that in reality the majority of Slovaks will choose the advantages of global competition for them as customers over economic and geopolitical isolation – although they’ll need to balance these aspects against the real disadvantages of a globalized jobs market for employees.

Thanks to the crisis, growing protectionism could end up destroying what has been built in recent years. Panic theory may step in: globalization will lead to global conflict and revolution, bigger than a century ago. Not so!  Many bankers will stay in their office. If we end up believing such a pessimistic point of view, medieval farming in the heart of Europe looks like a fine alternative.

Back to good old days when the only debt Slovaks owed was just to the local innkeeper. Hopefully not…and on that note….