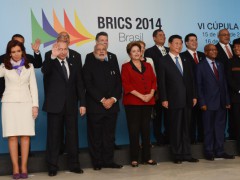 The “decline of the West” has become an increasingly ubiquitous phrase in recent years. Depending on your perspective, you may cringe or express glee at the thought of the Western world going into relative decline and opening space for developing countries like China, India and Brazil to take on a more assertive role in shaping the international system.

Contingent events like the American, British and NATO debacles in Iraq and Afghanistan and the 2008 financial crash—which affected the US and European Union most severely and led to widespread disillusionment with the American economic model—have only fanned the flames of those calling for the Western powers to step aside and let the ascending nations of the globe have a greater voice.

The result of a recent meeting in the city of Fortaleza, Brazil, has caused those calls to become louder than ever before. Fortaleza served as the host to the 6th annual summit of the BRICS, the quintet of emerging powers spanning four continents: Brazil, Russia, India, China and South Africa.

The leaders of the five BRICS nations along with Christina Kerchner of Argentina and Evo Morales of Bolivia (from left to right: Kerchner, Putin, Modi, Rousseff, Jingping, Zuma, Morales). Photo published by Global Panorama on Flickr under the CC Attribution-NoDerivs. Photo by Ana de Oliveiros

The term BRIC (South Africa was not yet included) was coined by Jim O’Neill of Goldman Sachs in 2001 to describe the quartet of emerging countries. India, China, South Africa and Brazil are post-colonial societies still emerging from decades (or centuries) of poverty and foreign domination, determined to become economically viable and project influence in the international sphere.

While Russia can hardly be called a “developing” country it has thrown its lot in with the BRICS as part of a commitment to “multilateralism” and a geopolitical strategy of balancing what it sees as unrestrained American power.

The group has become more cohesive over the years, although its actual viability as a geopolitical bloc is dubious. China and India still have a long-standing border dispute, the relationship between Russia and China is difficult to unravel, and Brazil and South Africa have performed poorly economically in recent years.

Regardless, at the 6th summit of these countries over the 14th to 16th of July a momentous announcement was made: the five members would create a joint development bank serving as a potential counterweight to the Bretton Woods-era holdovers International Monetary Fund (IMF) and World Bank, US-dominated institutions deeply mistrusted in the developing world.

The new BRICS bank is aptly called the New Development Bank (NDB) and will be given an initial capital endowment of $100 billion (half of which will be provided by China) and another $100 billion “contingent reserve arrangement,” to be made available in the event of a sovereign debt crisis. The bank will thus mimic the role of both the World Bank and IMF, acting as a development fund specializing in infrastructure projects while at the same time serving as a lender of last resort during debt crises.

Mirroring the tradition of the IMF being primarily a US-funded and located but European-led institution, the NDB will be housed in Beijing and funded primarily with Chinese capital while being presided over by India for the first five years.

Opinions are split, with some like Joseph Stiglitz declaring it to mark a “fundamental change in global economic and political power,” while less optimistic observers like Joshua Cooper Ramo have called it an arm of the emerging “Beijing consensus.” Some have argued that potential fault lines between member countries–China and India in particular–will become barriers to sustained cooperation. What is clear is that the NDB is a reflection of serious discontent with the Bretton Woods institutions among the leaders of the developing world.

While some casual observers were quick to hail the new bank as a potential alternative to the IMF and World Bank, in reality it’s nothing of the sort. All five NDB founders are also IMF members, and none have expressed interest in leaving that institution. And while the $100 billion endowment and $100 billion reserve fund are significant, they still pale in comparison to the IMF’s war chest; it currently holds $386 billion in quota resources and can provide supplementary resources of another $572 billion.

World Bank President Jim Yong Kim even told reporters after a meeting with Indian President Narenda Modi “the only competition we have is with poverty…Any bank or any group of institutions that try to tackle the problem of infrastructure investment to fight poverty, we welcome.” Some have argued that the NDB could help fill in gaps in funding by the older institutions.

Indeed the NBD is intended to compliment both the IMF and World Bank while inducing them to undergo desired reforms. Brazilian President Dilma Roussef said as much when she proclaimed the bank to be “a sign of the times, which demand reform of the IMF.” BRICS leaders hope that the NBD will meet some of their immediate financial needs while increasing their leverage within the Bretton Woods institutions.

What’s the Problem with Bretton Woods?

That begs the question, what is wrong with the IMF and World Bank? Starting with the IMF, critics tend to argue that it exists solely to protect the interests of creditors, most of whom are banks based in the northern hemisphere. The institution provides emergency credit during sovereign debt crises; the problem is that the credit goes directly into the hands of foreign creditors, not to be used at the discretion of governments in need.

While the IMF helps debtor countries stave off default, it does so only at the cost of a dreaded “standby agreement,” a sovereignty-eroding package of IMF-ordered reforms generally involving import and price liberalization, deregulation and budget balancing measures; the latter often achieved by means of slashing social safety nets and subsidies for people already living in poverty. That is where the often pejoratively-used term “Washington consensus” comes from; it was the title of a 1989 policy brief by IMF economist John Williamson urging the use of market-based policies to promote growth in developing countries.

The IMF-critical Bretton Woods Project summed up collective criticism of the institution: “IMF conditionalities may additionally result in the loss of a state’s authority to govern its own economy as national economic policies are predetermined under IMF packages…IMF packages have also been associated with negative social outcomes such as reduced investment in public health and education.”

As for the World Bank, detractors tend to focus on the organization’s top-down decision-making structure and emphasis on the Washington consensus policy paradigm. The institution’s stated goal is to promote economic growth and prosperity in undeveloped countries; however, many critics argue that it fails miserably in this regard.

Rather than allow ivory tower bureaucrats in industrialized countries to use loan conditionality to effectively write policies for developing nations, critics say, the recipients of funding should have more freedom to tailor their own economic development strategies. One way to do this would be to give developing countries more decision-making power within the institution.

Both organizations have drawn the ire of the BRICS and other developing countries largely because their decision-making bodies are heavily weighted in favor of western countries. Given that the five BRICS nations now comprise roughly 42 percent of the world’s population and 20 percent of total economic output (more than the US or European Union), they feel it’s time that they take on a more central role in the IMF and World Bank.

Are Changes on the Horizon?

The creation of the NDB should be a wake-up call to Western officials who have been obstinate in the face of reform; most notably the US Congress and its stubborn refusal to ratify changes to the IMF’s quota and voting system. As the US has veto power over changes to the internal structure of the IMF, no reform can go through without its blessing.

Failing to better take into account the interests of the BRICS could make them more apt to use the NDB as a sole source of development resources, reducing the necessity of the IMF and World Bank for those governments. And if the NDB does become a successful counterweight, it will be ever more attractive for other developing countries.

This could have implications for the role of the US dollar as well. The IMF issues in the form of Special Drawing Rights (SDRs) which are an imaginary currency whose value is determined by a dollar-heavy currency basket. Thus the issuance of SDRs indirectly increases the international financial system’s dependency on the dollar. If the NBD did become an alternative to the IMF, the dollar’s international significance would diminish, as would America’s standing in the world.

I'm a graduate of the Master's program in International Relations at Central European University in Budapest. I spend most of my time traveling in Eastern Europe and the post-Soviet space, writing about politics and economics in Europe and the US.