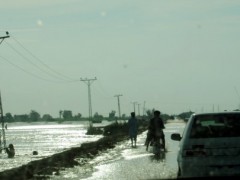 Near Kohli, approach into what was desert, Sindh

Nothing is more frightening than witnessing the extremities of climate change & there is no starker example of this in recent history than the flooding of the desert areas in the Thar and Badin district of Pakistan. As part of a community-based relief organization I had the misfortune to experience this directly. Realization of just what was confronting us sank in when we had to stop our jeeps in the Kohli area and take fiber glass boats to go on further. A few weeks before this entire area had been bone dry and arid, especially the approach to Mitthi. Now, however, the highway simply disappeared into the waters in the distance.

The reason for such devastation was of course the tremendous rainfall that hit the whole Badin district, some 1100 mms in just a couple of days. This kind of climate change has never been heard of or seen in the area’s history. With drainage facilities overwhelmed by the amount of water they had to cope with, the flooding destroyed nearly 5.8 million acres of crops and devastated the livelihoods of 8.9 million people, most of whom will be shelterless under the open sky for many months to come.

That is not however the worst issue facing these rain affected areas in Sindh/Pakistan. Over the past few weeks the water level has dropped and will continue to do so, but when it recedes the multitudes sitting on the roads and in camps will have no place to return to. People talk about the mass return of displaced people as if it were something which can happen over a few days. What they do not realize is that when flooding on such a massive scale takes place, the entire geography of an area changes so radically that when it’s time for a farmer to go back to his village he might find the general area but would find the landscape so changed that he probably couldn’t even identify where his village was.

The obvious outcome of such a situation will be a massive land rush. Poor farmers returning – mostly with just the clothes on their backs – will be scrounging to reclaim what land they had before and many of them might even see an opportunity to claim more than is duly their own.  After all, they only have their income from agriculture to see them through this climate change disaster and thus would try to maximize the potential for next year’s crop. The crop is all that matters to them; the crop can be their savior that rescues them from their dire predicament.

Without a proper system to deal effectively with these land claims most  matters of this nature will be solved by local “panchaits” (Jirga by elders) which would normally result in the favoring of those persons with most influence. Obviously there will be many sharks in the shape of corrupt officials prowling the flood waters for a piece of the pie. What better bonanza than millions of unsorted acres of claims?

Civil society and government have up till now performed a true labor of Hercules in feeding these multitudes and providing them with shelter in their time of need. Only now there needs to be a consensus on how these land claims will be dealt with. Perhaps a new department based on local people from the area needs to be created. Perhaps information technology and social media can create digital maps of before and after the floods to note changes in geography and give landowners appropriate compensation. In either case something needs to be done and done quickly because the worst thing a refugee can face is not desperation on the run from disaster but the realization that at the end of the day his piece of this world now belongs to someone else.