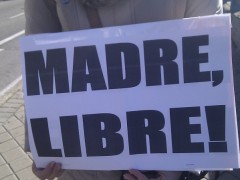 Every 28th of September women health advocates claim for world changes in the International Day of Decriminalization of Abortion. This year in Spain more than 3,000 people gathered to celebrate after having won the battle against the Ministry of Justice with the drop of an abortion bill estimated as one of the more restrictive in Europe. The government’s attempt of change the current abortion on request law for an only-two legal cases draft (abortion in case of fetal impairment would have been banned) triggered an intense campaign by feminist movements in the country and also abroad. If this bill would have passed , Spain would have been ranked in the same position as Bolivia, Bhutan or Cameroon.

Despite the fact that the abortion law amendment was an electoral pledge vaguely contained in the People’s Party manifesto, there was no social demand save for extremist sectors  representing a minority in the country. Furthermore, the bill’s withdrawal was intimately connected to the voting intention polls, where even conservative voters could punish the ruling party because of this bill.

Passing this draft would have had serious consequences both at a local and at an international level. In the first place, it would have meant a clear setback for Spanish women reproductive rights putting them at the level of pre-democracy times when they travelled to London to get safe abortion for €272. This story became the first report made by the then rising newspaper El País in 1976 . As the feminist and lawyer Marisa Soleto puts it, this draft meant “the elimination of women’s autonomy when deciding on motherhood, returning to medical and psychological supervision but in a much more severe version. It established a “state of emergency” on the rights of women: women rights remain intact until they get pregnant”.

A sexual, economical and legal setback for Spanish women

Besides that, the abortion bill would have set a straightforward position of inequality compared to other women within the EU since Europe has the highest number of countries that allow abortion on demand (32) as this world interactive abortion rights map elaborated by The Guardian shows. This is the reason why one of the actions taken by Spanish activists was symbolically ask for asylum in front of the French Embassy door.  The main goal of the Estrella Report on Sexual and Reproductive Health and Rights –rejected by the European Parliament on December 2013– was to put an end to this situation, stating that abortion “should be allowed to all women within the EU to prevent them from travelling form one country to other”. This process would pose a financial burden and create the possibility of women being open to prosecution not to mention the negative psychological effects this process could have on an individual.

The ban of safe abortion on fetus malformation case raised an outcry among medical associations and disabled parental associations , mainly when the state budget aimed at special needs people (dependientes) has been cut up to a 72% since 2013. This circumstance,  added to the economic collapse would have surely pushed women into the domestic field again as family caregivers. “It`s not only about our sexual and reproductive rights” says Bagoña Piñero –the Train of Liberty “Because I decide” promoter- “they are using the economic crisis as an excuse to take us out all those things that helped women to access to more equality like labor market”.

The amendment of the current law would also show how deeply connected are reproductive and economic conditions hitting poor women, mostly because they could neither afford their maternity nor getting a safe abortion. “With the crisis as backdrop inequality will go deeper both for having a safe abortion as for dealing with maternity. It’s simply neglectful because there are no empirical data to support it”, underlined Marisa Soleto when it was made public back in 2013.

Abortion protest in Barcelona, by David Berkowitz, 7 October 2012 from Flickr, under Creative Commons licence (CC BY 2.0)

Also international women associations expressed their concern on this backwards movement in Spain because of two reasons. In the first place, this could encourage those so-called “pro-life” movements struggling against sexual and reproductive rights. In addition, it could also prevent pro-choice movements in underdeveloped countries from achieving their goals while seeing the involution of a role model in the women rights as Spain has been for the latest times. “The lesson we draw from the Spanish case takes us 30 years ago. We thought this battle was already won and we are really concerned because it is not. Do not forget that Spain, after all, is part of the European Union, an area that has historically led the defense of Human Rights” says Claire Combe-Serre, member of Osez le féminisme, French association that actively campaigned against Spanish abortion amendment and found its withdrawal as a “victory for the feminist and women all over Europe”.

One of the most controversial points on abortion has to do with religious beliefs and the growing secularization of laws as posed by Enrique Gimbernart, a well-known Spanish jurist. In the 50s those sins considered crimes by the non-Catholic Christian world (homosexuality, abortion, divorce…) were deleted from most of the European penal codes while setting up the separation between Church and State. On the contrary, in Franco’s Spain that relationship grew even tighter. This connection seems to remain strong yet in other catholic countries as Ireland –where confusion over abortion law was a key factor in Savita Halappanavar’s death – Malta, Poland and Italy – where even though the law is quite permissive, 80 percent of gynecologists accommodate to conscientious objection for religious beliefs-.

Abortion is clearly a controversial subject for many people in the world. During an interview in the Spanish public broadcast the Uruguayan PM Pepe Mujica was asked whether sometimes ruling meant making decisions even when someone does not agree with them -regarding abortion, same-sex marriage or marijuana’s legalization in the South American country-.

“The thing is simple, it`s a matter of common sense. I think none can be in favour of abortion just for principles but many women are forced to make that choice come wind or weather because of life’s circumstances. Those people live in secrecy putting their lives in danger. Acknowledging that fact and putting it on the table allow us to save as many lives as we can. We have to take responsibility” he answered.

Since the law came into force, maternity mortal rate in Uruguay has decreased up to 20,000 cases compared to the 190, 000 in Bolivia where abortion is allowed just for saving woman’s life, in case of rape and for risks of physical/mental health.