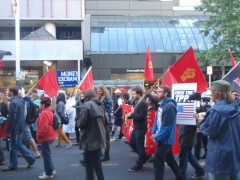 A few years ago, the concept of “the 99%” entered mainstream parlance. It’s a bit of an ironic expression because quite frankly the missing 1% refers to those with the money and the power and leaves the rest of us, the 99%, very much like mere puppets on strings moving to the whims of a rich few. But wait, it doesn’t have to be like this! We can, and we do need, to take the power back into our own hands. We need a powershift of a different kind, where we the citizens, come first, not big corporations and governments. Just like the recent citizens movement against the Trans-Pacific Partnership Agreement (TPP) in New Zealand, people like you and me are the wheel of the power shift.

The TPP is a push for freer trade in the Pacific region which has now reached our shores. And it’s controversial; here’s why.

I first became aware of the Trans-Pacific Partnership (TPP) last December in Auckland, New Zealand. “People before Profit”, “Say No to TPP!”, “F@*! the TPP” were some of the signs held by a crowd of some 50 protestors marching up Queen Street in the middle of the city.

The TPP is a free trade agreement being negotiated between the United States and countries in the Pan-Pacific including Australia and New Zealand. Its highly contentious part is the introduction of the Investor State Disputes Settlement (ISDS) system, which sees the establishment of supra-national tribunals which act as an independent judiciary to arbitrate disputes that arise between corporations and states. This system will allow a company to challenge a state if it believes that a particular piece of legislation could be detrimental to its future profits. It could be legislation that bans mining exploration, imposes environmental levies or reduces consumer demand, such as the Australian Government’s call for plain cigarette packaging.

If the tribunal rules in favour of the company, it can override the laws of sovereign states and issue fines, which inevitably will be covered by taxpayers’ money – in other words people like you and me will have to pick up the tab.

The height of absurdity is that states can’t even sue corporations operating in their territory. Wiki Leaks dubs the ISDS a ‘one way street’. I consider it to be – if the ISDS is introduced – an institutionalised form of injustice to democracy.

Similar tribunals already in place in other parts of the world show that in order to avoid paying fines, states either amend or dilute their regulations. As Dr Kyla Tienhaara from the Australian National University outlines in her submission on ISDS to the Australian Government’s Department of Foreign Affairs and Trade, Argentina had incurred compensation claims worth an estimated US$17 billion by 2006  – equivalent to the country’s national budget.

Will TPP open up opportunities for mining companies to sue governments? Photo taken by Author

Over in El Salvador, Pacific Rim Mining (now owned by OceanaGold) is suing the government for failing to grant them gold extraction permits. The company, which acquired the El Dorado gold mine located in San Isidro in the central region, is seeking at least US$300 million in damages because they were not able to obtain the relevant permits from the Ministry of Environment and Natural Resources. Why? The reason was blatently obvious: Pacific Rim did not satisfy the environmental safeguards nor carry out informed public consultation, both of which are set requirements under Salvadoran mining laws.

Nevertheless, Pacific Rim Mining was able to pursue litigation because El Salvador had signed the US Central American-Dominican Republic Free Trade Agreement, without the support of the people of El Salvador, by the way.

What happened in Argentina and El Salvador should not be allowed to replicate itself in countries where the TPP is being negotiated. Australia and New Zealand are the countries in this part of the world currently engaged in TPP negotiations. A groundswell of anti-TPP sentiments is ringing loud and clear in Australia, and protestors have occupied a TPP conference.

Now, why would the Australian or New Zealand Government – or any government for that matter – sign up to an international trade agreement that exposes them to the risk of being sued? And why would they want to undermine the principles of democracy and let corporate interests override the interests of the people?

Well, according to the Australian Government, TPP is considered to be beneficial because a) creates a building block for economic integration among countries in the Asia Pacific region  b) applies rules of origin so Australian exporters can identify new opportunities within the supply chain c) provides greater market access for goods and services within existing free trade agreements d) reduces barriers such as foreign restrictions on capital and investment flows for Australian financial services providers and e) provides a framework for engaging with countries where bilateral free trade agreements do not currently exist. As the Australian Government describes in their own words:

“TPP is more than a traditional trade agreement; it will also deal with behind-the-border impediments to trade and investment.”

However as I have already explained about the ISDS and the situation in El Salvador, the real issue is not about tackling ‘behind-the-border’ economic barriers but what will go on ‘behind-closed-doors’ if countries sign up to the TPP. The problem is, negotiations about TPP thus far have been kept in the dark, away from the eyes of the public. You and I have to change that because it’s our business and we have the right to know.

As the protestors marched further up the street, I couldn’t help but think that we need to stand firm and not let corporations take the power away from us. If our governments don’t look after their citizens’ interests, then who will?

We cannot afford to stand back and let governments make deals that place our country’s future in the hands of corporations. How can you stand firm? Use your right to speak to your member of parliament or write a letter to the Prime Minister outlining your concerns. These types of actions have worked in the past; take for example the pressure global society has placed on taking action on climate change. In Australia, the pressure placed by citizens to highlight the horrors of the live export industry made the then Prime Minister Julia Gillard, temporarily ban live exports. And for small-scale victories, look at the success small towns in northern NSW have had in impacting multi-national mining operations. If the TPP had been in force when this happened, would these companies have used the ISDS to sue Australia?

What we do or don’t do will have an impact on what happens with the TPP. We have to act fast and we have to act now. It’s high time for the power to shift.