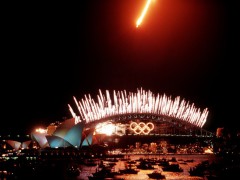 The Sydney 2000 Olympics was arguably the first time that Olympic volunteers received not only local, but also highly visible international recognition. However, volunteering at international sporting events is not a novel concept. It is a practice that is strongly intertwined with the Olympic story, dating back to the very earliest games of the modern era, in which individuals from local sporting clubs were engaged to assist in the logistics of running events. It is only in the more recent past that volunteers have gained greater prominence as a staple feature of the Games. Through structured human resources management practices involving the active recruitment and training of tens of thousands of individuals, the Sydney Organising Committee for the Olympic Games (SOCOG) was able to mobilise nearly 47,000 volunteers during the Sydney Olympics. This is a number that is greater than the preceding Los Angeles, Seoul and Barcelona Games. However, the ultimate economic legacy of this one-off and highly temporal accumulation of volunteer effort is difficult to assess.

A volunteer leading out a team of athletes during the Opening Ceremony of the Sydney Olympics in 2000. Photo by Rick Sforza via Wikimedia Commons.

Placing a value on volunteers in sport

The economic contribution of volunteers is a phenomenon that is largely overlooked in the area of sports research. Yet studies into the roles assumed by volunteers in sport governance and delivery suggest that the vast majority of Australia’s sporting activities could not continue to function in the absence of their unpaid contributions. In fact, the sport and recreation sector of the domestic economy is the single largest beneficiary of volunteer labour, with almost 40% of all volunteer work undertaken by Australians being applied to sport. It has been estimated that these 2.3 million volunteers contribute almost $4 billion to the sporting sector annually, an industry that itself contributes approximately 2% to Australia’s GDP.

These economic contributions made to Australian sport on a regular basis through volunteer work were also apparent, if not amplified, during the Sydney Olympics.

Although difficult to accurately estimate, SOCOG was able to derive significant economic benefits from the engagement of volunteer services during the Sydney Games. In economic terms, the volunteers essentially acted as an input of labour into the effective delivery of the Games, accounting for almost 41% of the total labour resources assigned.

Approximately half of the nearly 47,000 volunteers were specialists, and were engaged as technology experts, equipment operators or sport and fitness assistants, while the other half provided general labour, working as ushers, venue operators or guides.

The majority of volunteers worked an average of 80 hours prior to and during the Games, with some committing several thousands of hours in the lead up to the event. The comparable worth of the 7 million hours in unpaid work that they provided in total has been estimated at $109,756,925. If SOCOG were required to hire paid staff or contractors to undertake the services that were supplied by the volunteers, the total expenditure on facilitating the Olympics would have risen by 4.5%. Essentially, the Games would have either been more expensive to produce, or alternatively, cuts to particular aspects of the event would have needed to be made.

Viewed in another way, the returns per dollar invested by SOCOG into the volunteer program were substantial. When considering the economic value of the volunteers’ labour against the cost of providing their services, which amounted to $5 million, the economic benefits of engaging volunteers become even more readily apparent, with the ratio of volunteer service costs to the value of their labour equalling 1:21. In other words, for every dollar invested into volunteer training, more than $21 of service was generated.

Monuments at Sydney Olympic Park bearing the names of every Olympic volunteer. Photo by Andy Miah, CC BY SA 2.0, via Flickr

The ripple effect from the volunteer effort?

From Australian Bureau of Statistics data, it can be extrapolated that just prior to 2000, 4% of the population were engaged in voluntary services within the sport and recreation industry. By 2011, this figure had risen to over 10%.

How much of this increase in voluntarism within the sporting sector can be attributed to an enthusiasm for volunteering that was generated by the Sydney Olympic Games? This is a difficult question to answer, particularly given that over a decade ago, the utility monitoring of the Olympic volunteers’ post-Games volunteering patterns had not been as fully recognised as it is perhaps today.

It was envisaged by both SOCOG and local non-profit organisations alike that the positive public perception of volunteering that was generated during the Games would encourage other Australians to dedicate their time to worthy causes over the years to come. Several newspaper articles published just after the closing ceremony spoke of the third sector’s hopes that the country could effectively capitalise on the goodwill generated by the Olympic volunteering spirit, and that Australians would continue to value the experience of volunteering beyond the Games themselves. The comments made in this newspaper article by a local non-profit organisation’s spokesperson that “once people are exposed to the volunteering experience, they will realise just how rewarding it can be” encapsulated the prevailing hopes of the domestic third sector at the time.

It was also widely expected that the experience of volunteering at the Olympic Games would create a broad base of newly-skilled volunteers, essentially a source of social capital that was enthusiastic to engage in further unpaid work on a local scale. Indeed, the Olympic volunteer program did introduce several newcomers to the volunteering experience, with more than half of all Olympic volunteers undertaking unpaid work for the first time during the 2000 summer Games.

However, it may have been too optimistic to assert that this immense interest in volunteering would ultimately last any longer than the Games themselves. The catalyst to the significant public involvement in the Games was arguably the unique scale, spectacle and profile of the event, intangibles that cannot be reproduced in everyday volunteering settings such as local hospitals, museums or aged care facilities.

This is a reality that was also faced after the 2012 London Olympics, with a study conducted in 2013 indicating that only 2% of the surveyed Olympic volunteers had undertaken further unpaid work as a result of their experiences during the London Games. It has been speculated that this may be attributable to the fact that the “glorious one-off” nature of the Olympic Games generates a degree of enthusiasm that cannot be readily transferred to other charitable efforts.

Similarly, the ability of the Sydney Olympics to establish an enduring legacy through the creation of a sustainable culture of volunteerism was perhaps ultimately thwarted by the uniqueness of being part of the Olympic experience that cannot be replicated elsewhere.

One of the most often-cited reasons for volunteering at the 2000 Olympics was that it presented a “once in a lifetime” opportunity, and it is not unlikely that the volunteering experience remained just that for many individuals – a one off event.