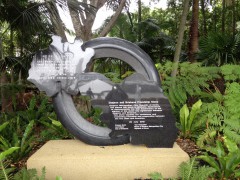 “In a sense it’s strange that humanity didn’t turn out even worse…that our goals are sometimes unrealistic and that we have to live with frustration is bad enough..” – Johan Galtung.

Galtung one of the foremost theorists in peace and conflict studies, I believe hits the nail on the head. That we can even operate and cooperate is indeed, a miracle. With the immeasurable amount of differences, disagreements and disputes that we as humanity have and yet, here we are. Still.

Explosions, hate speech and violence may be loud but symbols are so much louder. A handshake, sharing food, a minute of silence, a hug – these seem like incredibly simple gestures but they are symbols of something far greater. Of our deep respect and value for each other and for peace.

Symbols are undoubtedly a universal mark of successful communication. Sometimes symbol don’t fully translate to other languages but you can smile at another person or give a peace offering and that person will know what you are saying.

The soldier on the image for this article has a peace symbol drawn on the palm of his hand, most people throughout the world would recognise this as the symbol for peace. Communication, I believe, is one of the best methods of conflict resolution;  symbolism plays such a huge role in our societies that we often underestimate the effect it has on how we think about and perceive each other.

Over the many years I’ve walked through Southbank Parklands in Brisbane and strolled across the walkway that runs alongside the river, I never paid as much attention as I did recently in response to the article on War & Peace; to two “symbols” or “stones” placed along the walkway.  Friendship stones.

What this tells me about this “stone” is that it is a symbolic gesture of friendship between the city of Daejeon, South Korea and Brisbane, Australia. It is literally, a permanent structure displaying the commitment in a permanent nature of the co-operation and friendship that these two cities intend to have into the future.

You walk a little further along the path and you come across another stone, an Australia-Japan Friendship stone. Erected in 1994 after the holding of the Tenjin Matsuri Festival in Brisbane.

A particular statement jumped out at me…”We pray for lasting peace and for the happiness of the young people of the next generation.”

From Korea to Japan, we make agreements, negotiate cooperation and look to peace to be our symbols of society rather than conflict. We celebrate important moments like ANZAC Day or Remembrance Day in Australia but only to pay respect to those who died fighting for what the whole of humanity values among all else; peace. These days do not glorify conflict, it glorifies peace, in the most unspoken manner of ways – nationwide, we have a prolonged moment of silence to pay our respects. Not a word is uttered but this gesture of respect is symbolic in nature and says more than any lengthy speech could.

Conflict may be part of our nature but so is peace. With very little words and more symbols and gestures we demonstrate that we can communicate to each other what we want for humanity and how we may have differences but ultimately it is our inherently peaceful nature that transcends our propensity to disagree through that which is actually unsaid.

Peace is universal. Conflict is incidental.