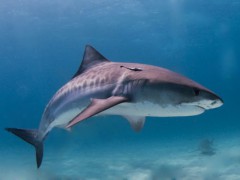 Following a series of recent fatal shark attacks in Western Australia, the state government implemented its controversial pre-emptive shark mitigation strategy, a $6.85 million program that involves the installation of baited drumlines to catch and cull sharks measuring over 3 metres in length.

The Government’s stance: cull or be killed

The Western Australian government has begun strategically setting up drumlines with 72 baited hooks at a distance of 1 kilometre from the shoreline of several popular beaches, enabling any sharks of the minimum 3 metre length that are caught by the hooks to be “humanely destroyed”. Only one day after the drumlines were deployed, the controversial catch-and-kill operation claimed its first victim on Australia Day, a three metre female tiger shark.

Supporters of the culling program argue that the government is simply fulfilling its duty of care towards its citizens by attempting to reduce the risk of shark attacks and improve public safety on the state’s beaches. The government also maintains that the recent shark attacks in the area have detracted from the perceived safety of local marine recreational activities, which constitute a strong drawcard for the state’s domestic and international tourism industry. In this respect, it fears that further deterioration in the public’s confidence in the safety of its beaches deriving from any further shark attacks would have negative consequences for the tourism industry.

Are humans deadlier than sharks?

Indeed, given the number of recent shark attacks, a perception has been created that the threat to public safety has increased over the past few years. Yet, without detracting from the seriousness of individual incidents, it must be remembered that the overall likelihood of shark attacks still remains negligible.

Research indicates that the increasing number of shark attack incidents occurring each year does not necessarily derive from an increase in the shark population, but is rather attributable to the greater amount of time that people are now spending in the water, the increased popularity of water-based fitness and recreational activities, as well as Western Australia’s burgeoning population, which is growing at a rate higher than any other Australian state.

Cottesloe Beach, where drumlines have been set. Photo by Bram Souffreau via Wikimedia Commons, CC BY SA 3.0

In fact, when put in perspective, shark attacks constitute far from the leading cause of death on our coastlines. A 2013 report from Surf Life Saving Australia indicates that, with 121 instances occurring annually, there is a much higher risk of drowning on the coast than being bitten or killed by a shark. A study from the University of New South Wales also reveals that rip currents claim an average of 21 lives annually in Australian waters, compared with only one death caused by sharks each year.

The statistical unlikelihood of shark attacks is not the only point that culling opponents have raised. Many have pointed to the fact that the program targets marine species that are considered, both domestically and internationally, to be in need of protection from human interference. For instance, one species of shark that, due to its naturally large size, will be particularly affected by the government’s shark mitigation strategy is the great white shark. This shark is listed as a protected species under the Convention on International Trade in Endangered Species of Fauna and Flora and the Convention on Migratory Species. After years of being hunted for its fins and teeth and being killed as bycatch by commercial fisheries, the great white shark is thought to be more threatened than the tiger, with only a few thousand remaining in the world’s oceans.

The Great White Shark. Photo by Hermanusbackpackers via Flickr, CC BY SA 2.0

This shark species is also protected as vulnerable under domestic law. In fact, in order for the culling strategy to be implemented, the state government needed to obtain an exemption from federal environmental protection legislation designed to protect threatened species, such as the iconic great white shark. The irony of this situation has been repeatedly emphasised by protestors at several of the rallies that recently took place throughout the country, at which a collective total of more than 10,000 people nationwide demanded that the government cease its use of baited hooks in Western Australian waters.

Protesters at an anti-culling rally. Photo used with permission of photographer, @Ronel0 via Twitter

In an international law context, the Western Australian government’s actions appear somewhat out of place. As a nation that condemns Japan’s killing of whales and dolphins, it needs to be questioned how the state government’s practice of killing protected marine life in its own waters can be justified.

Culling’s ecological impact on sharks and other marine life

Sharks are important not only as a protected individual species, but also as part of the wider marine ecological balance. These animals serve a critical role within the ocean ecosystem by regulating, directly and indirectly, the marine food pyramid. Dr Carl Meyer of the Hawaii Institute of Marine Biology observes that targeted culling “runs the risk of ecosystem-level cascade effects where a general lack of sharks results in boom or bust in populations of species further down the food chain”. The removal of sharks from our ocean ecosystem under the government’s catch-and-kill operation is therefore likely to have significant ecological effects on both present and future marine life populations.

Yet it is not only shark species that are at risk of being caught and killed on the newly-installed baited drumlines. Although its large hooks are designed to catch predominantly larger sharks, the drumline devices have recently proven to be quite indiscriminate in their operation, having so far caught several markedly undersized sharks, and most recently controversially killing a tiger shark that was only 2 metres in length.

However, apart from small sharks, experts predict that other marine animals, particularly dolphins and turtles, could also become caught in the baited hooks. In fact, just recently, the Animal Rescue Team and West Australians for Shark Conservation undertook a rescue operation to free several distressed animals, including a stingray, that had become caught in the drum line hooks. A spokesperson for the rescue teams commented that “[t]here was not one drum line where they encountered a bait with nothing on it. Every hook had an animal.” Comments such as these serve to highlight the continued indiscriminate operation of the baited drumlines.

Given the significant detriment caused by the baiting system to local marine fauna, the government’s lethal shark control methods must be replaced by more modern beach safety programs. These could include the increased utilisation of signs and flags on site to warn beachgoers of marine hazards and the deployment of additional patrol vehicles to better detect the presence of sharks. Over recent years, more information about shark biology, movement patterns, population connectivity and behavioural characteristics has been discovered through programs such as the CSIRO’s white shark research project. The knowledge gained from such programs needs to be more widely disseminated through education initiatives, in order to improve the public’s understanding of shark habits and thereby reduce the risk of shark attacks.

In addition, Western Australia’s Shark Monitoring Network, a new tagging system that provides alerts via the Surf Life Saving’s Twitter feed (and soon also through its ‘Shark Smart’ website) when one of 338 tagged sharks swims within 1 kilometre of the coastline, could also be extended. The installation of further satellite tracking devices on sharks to determine their movements would, in addition to benefitting the research of marine biologists, also enable beach users to be more aware of the presence of sharks near the coastline.

Rather than removing sharks from their natural territory, these measures can be used in combination to reduce the likelihood that these animals will cross paths with beach users, and should be promoted and better resourced in the place of the government’s pre-emptive culling program.