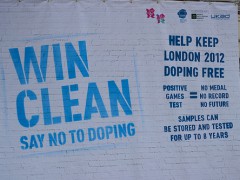 Photo from the campaign of  the British Department for Culture, Media and Sport, via Flickr, CC BY-NC-ND 2.0

“Free and fair” is, given the current definition of Olympic rules, an unreachable ideal. Even fair judges can judge only those things which are visible during the competition itself.

At best, they will screen for banned chemicals in the bodies of winning athletes. Even in cases of known forbidden substances, some of them become undetectable after a short period of abstinence.

Not to forget that athletes who genuinely want to act fairly may end up doping. I remember a TV discussion with a Czech cyclist who tested positive a few years ago. He stoically said that he usually gets a few injections each and every day and that he is not able to recognize whether they contain only the allowed special sugars his stomach is not able to accept or something else illegal.

How many sportswomen use absolutely legal contraceptive pills to improve their results?

Sometimes unfairness is supported by the state. Back when the Olympics Games allowed only amateur participants, all Czechoslovak sportsmen became “amateurs” – at least on paper. Nowadays, if China decides that their gymnasts are older than the required limit, it is hard to argue against this, because the state itself controls all the paperwork that might prove the contrary.

When mentioning China, the lead article intro questions the fairness of the Olympics because of “the support that is needed to develop Olympics-caliber athletes is only available to people from the world’s wealthiest countries.” However, where in the developed world is it common (or fair) to take children away from their parents just to achieve short-lived victories?

Keeping all these aspects in mind, I think there is no reason to really worry about the number of gold medals of a developed USA versus those of developing China. The Olympics should be about something more than just the pure competition in various sporting events.

For my mother, for instance, it’s also about the opening ceremony and its display of national dress. I personally usually keep my fingers crossed for the outsiders. At the Olympics there are a few wild cards that let some athletes enter the first rounds even though they haven’t qualified for them.

I also liked the news about the good performance given by a nearly blind Korean archer and about the presence of Arab women at the games. I think for such athletes the Olympics make sound sense.