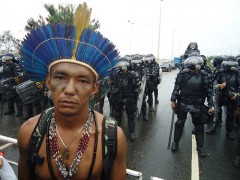 The old dilemma about growth vs. sustainability depends on what we mean when we use a word like “growth”. In the current model of development we must admit that, yes, there is an intrinsic contradiction between developing a country or an economy and making sure that the environment and most people that live in it will be O.K. It is not possible to sustain our present level of consumerism and individualism on a world scale without leaving an incredible amount of garbage, toxic substances and human misery behind. Recycling and replating are not magical processes that allow us to keep buying things we don’t really need and using cars the way we use them nowadays without paying a heavy price for these ingrained habits.

I think the key to reuniting growth and sustainability is to rethink the very concept of growth. Taking Western industrialized countries as the only possible model of a successful society leaves no room for ecology or social wellbeing. A “developed” society is one that lives by its own means, that is able to provide for its people without building a system in which everybody always needs more and more stuff to feel like a real person. In the present time, consumerism is like a way of existing, and producing more is always taken as something good, despite all the evident human and ecological consequences.

Brazil is a prime example of how this dilemma is working out right now in the Amazon. The development-driven government of Dilma Rousseff is currently trying to implement a hydroelectric dam project in Belo Monte, Amazon. The idea of ​​building a large dam in this region — which is occupied by indigenous people — was first proposed in 1975 by the Brazilian military dictatorship and assumes that the Amazon should function as a kind of storeroom  for Brazil’s urban and “civilized” population: a place where you just go and pick up what you want. This kind of thinking presumes that Amazon is “wild” and “behind the times” and needs to undergo technocratic modernization to keep pace with the rest of the country.

From a development perspective, a new hydroelectric power station that generates a large amount of energy is good for the country. Yet it turns out that this project will strongly affect the indigenous and riverine population living in this region, causing the relocation of more than 20,000 families living on the periphery of Altamira and in the rural area of ​​Vitória do Xingu and impacting about 350 riverine families, among other ecological and social consequences. Brazilian native populations are not seen by the Brazilian government as an important and constitutive part of our country and our national identity. They are not, in short, seen as people, but as an obstacle to the development and realization of the largest and most controversial part of the PAC (Growth Acceleration Program), a project of Lula and Dilma’s government to improve the country’s infrastructure.

Such predatory development is the very opposite of environmental conservation because it doesn’t see the environment as what sustains the livelihood of people living in the forest, but as a resource to be consumed and turned into profit. Belo Monte is one example of this. As the dam does not take the environmental aspect into account, even its capacity to generate power may be reduced because one of the effects of climate change on the Amazon rainforest is a decrease in the volume of water in rivers. Deforestation is another problem: in the case of Belo Monte, it could affect 5,300 square km of land beyond the flooded area. Although the Volta Grande do Xingu region is considered of “extremely high biological importance” by the Ministry of the Environment itself, it may be irreversibly damaged by a possible 80% to 90% reduction of the flow of the Xingu river over 100 miles of its course. This is not growth, this is predatory development, the kind of practice that we have seen in most countries in recent times and that has brought us to where we are today: with a surfeit of consumer goods and a very poor quality of life for most people.

The social impacts that threaten the populations of the Xingu are severe and wide ranging. They include constant flooding (as opposed to the present seasonal flooding) of the Ambe and Altamira which flow through the town of Altamira and part of the rural area of Vitória do Xingu, allied with reduction of the downstream water flow of the Volta Grande do Xingu river and interruption of the river transport to Rio Bacajá, the only access to coastal communities and indigenous people. Lower water flow means of course that this river will not have the same biotic and socioeconomic value for the population. Not to mention the possible extinction of endangered species that have never been studied.

It is difficult for a government that holds up the U.S. and the rich countries of Europe as a model of development to understand that having more energy at the expense of a major environmental and social impact is not a good deal because, in their view, this is actually the only possible deal. The government’s goal is to incorporate more and more people as consumers, not to guarantee support for groups that, perhaps unconsciously, they consider as inferior. In this case, like in many others, the answer to our title question is not whether it is possible to combine growth and sustainability, but whether growth means anything at all without first making sure that all of us can live on this planet and share the good things it provides.

Sources of the information in this text (in Portuguese):

Juliana Cunha, 25, is a Brazilian journalist.