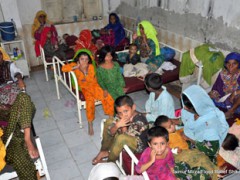 When they were formed in 1947, east and west Pakistan taken together formed the 13th most populous country in the world with a total population of 32.5 million. 65 years later this country is half the size of what it used to be with a separated east Pakistan that is now the 6th biggest nation with a total population of 180 million. By 2020 we are expected to pass the 210 million mark: a figure which seems disastrous as we are growing at an unprecedented rate of almost 2.05% which is totally unmanageable in terms of development. In simple terms, basically this means that you can spend as much as you like on infrastructure, you will never be able to keep pace.

Add to this the moral dilemma that modern medicine has introduced in third world countries like Pakistan “that of prolonged life”, and we have a death rate that has been on a steady decline for the past 10 years. Statistics say that in 2011 there were 6.92 deaths per thousand Pakistanis compared to 24.8 births. Our resources are already stretched to the breaking point with an electricity shortfall of well over 7500 megawatts, no gas available for industry or alternative fuel driven buses and cars for 14 hours at stretch, and hospitals bursting at the seams as there are simply not enough beds to accommodate the sick people. So can we as a society afford to opt for medicine which will further prolong the lives of our citizens and increase the already enormous pressure on our system? Yet can we on the other hand deny the aging or the terminally ill specific healthcare on moral grounds?

In this country such questions can lead to extremely emotional reactions. First of all Pakistan is a society which is taught through our culture and our religion to take care of the ailing without any concern for money. The greater the sacrifice you make in this way, the more you are honored by your peers and kin. Hence questioning treatment while keeping the bigger picture in mind is seemingly not an option. But I am afraid the brutal circumstances are taking the matter out of our hands. The fact is that public healthcare is completely non-existent in this country. Yes, there are government hospitals in every city but they are mostly just shells housing people (apart from the hard working doctors) who are primarily concerned with fleecing the poor patients for everything they have. You can get a bed for very little in such hospitals but getting medicine is another matter altogether. Palms have to be liberally greased before any respite reaches the ailing. In other words, the whole “shall we opt for people to have healthcare which can save them” equation goes out of the window when faced with the hard and fast rules of demand and supply – basically how much money does a patient or their family have?

This is the first rule of private healthcare in this country and its most stringent. Good healthcare is expensive and without the required large resources very few people in Pakistan can actually afford it. Which basically means that for most Pakistanis the moral dilemma of “to prolong or not to prolong” does not exist as we simply do not have that luxury of choice. We simply cannot keep up with the rising costs of double digit inflation here and are routed one way or the other towards the final chapter.

Obviously my hypothesis will seem terribly cruel to people who live in a world where all the basics of life like food, water, clean air and freedom are permitted and provided for by the state. These societies can then think about things like prolonging life or doubling their work force and all the long term effects. For us such questions of morality are sadly still a luxurious dream given the our worsening economic downturn. Yes, there are charitable institutions here and a few hospitals which also provide free healthcare for the poor, but they are hopelessly inadequate and swamped by the sheer numbers of people seeking treatment, even though this nation is one of the largest per capita charity givers in the world.

In short, and for want of more politically correct terms, the majority of us  Pakistanis simply die when our time arrives.