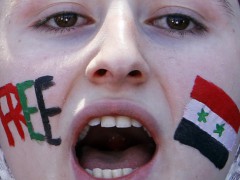 After almost 10 months of unprecedented protests calling for freedom and regime change, Assad’s regime still retains its hold on power, in spite of all internal and external pressure. Up to now the only thing that the regime and the protesters have proved is that they are both much stronger than anyone thought.

Anyone can see that when protests reach a critical mass they will be very hard to stop – even the unspeakable Syrian security apparatus backed by the Syrian army has found it really hard to suppress the current momentum of protest unfolding almost everywhere in Syria except in the largest two cities: the capital Damascus and Halab (Aleppo) remain relatively calm with only minor protests happening here and there. The question is WHY should this be so?

There is no doubt that the iron fist of the security forces and the army plays an important role in keeping things quiet in Damascus. Some people argue that as in Libya just before the regime collapsed the people of Damascus will join fellow protesters from outside the capital, but this does not explain the relative quiet in the northern city of Halab. The reason actually has to do with the Syrian middle class which is mostly concentrated in Damascus and Halab. Throughout the past 50 years, the  Syrian education system has been devoted to serving Ba’th Party radical ideology and to profiling both Hafez Assad and his son Bashar after him as demigods. This has created two whole generations who have never seen anything but the Assad family in power. For many people the mere idea of replacing the Assad family amounts to blasphemy, while for many others any change towards democracy appears just too good to be true in a corner of the world that has barely known any kind of democracy or civil rights in the last 4 generations.

A Syrian Woman Chanting for Freedom

The change in the Arab World during the Arab Spring has been led by the middle class which has been severely constrained over the last couple of decades. Though the middle class in Syria didn’t gain any fundamental civil rights in Bashar Assad’s reign, the young modern leader did create a new atmosphere for trade and opened up the Syrian market enabling entrepreneurs to develop excellent relations with neighboring countries and notably Turkey. This lead to the creation of a new class of wealthy businessmen concentrated mainly in the border city of Halab with many Syrians working for this newly created class and benefiting from the status quo. Even though lacking most its civil and political rights, this new class still prefers the status quo to the prospect of a much more uncertain future. Mass rallies supporting Assad were staged in Damascus and Halab.  Now I am pretty sure that the regime as always is still able to force people to attend such rallies, but I am equally sure that you will find a great number of people among these masses who still believe that Assad is Syria’s best option.

What’s more, the Syrian revolution never took the shape of a sectarian rebellion by the Sunni majority against the Alawite sect –which the Assad family comes from. Syria may number quite a few sects but the Ba’th party was a totally secular regime in which everyone suffered the same level of oppression. Yet the Syrian regime has waged a successful propaganda campaign against the uprising, which caricatures it as a sectarian movement.  This has driven almost all Alawites away from it, and a similar impact has been achieved in other parts of Syrian society which either fear that the uprising will turn finally turn into civil war or construct the new Syrian regime along  sectarian lines as in Lebanon, or reach a level similar to Iraq which is not much better than Lebanon.

Observers should also note that the Russians are totally against any type of UN or NATO involvement in the crisis. Syria is the oldest and the only ally of Russia in the Middle East; if Russia were to lose it, it would lose its only base in one of the world’s most important hot zones. A Russian naval fleet has now made its way to Tartous, a major Syrian sea port on the Mediterranean. This sends a very strong signal to Western powers that Russia has no intention of repeating the mistake it made when dealing with the Libyan uprising. A Russian veto looms large for anyone trying to bring the Syrian case before the Security Council.

In my personal opinion, the Syrian people started their own revolution demanding freedom and democracy without the backing of any regional or global power. To date, their uprising has been the longest of all public movements during the Arab Spring and it is not showing any sign of weakening. In 1982 the same Syrian regime massacred 20,-30,000 people in the city of Hama in an operation ostensibly waged against the Muslim Brotherhood and their military wing that had seized control of the city at that time. The regime wanted to set an example for anyone who might think of following Hama’s lead. Since there was a complete media blackout –much worse than the one now- the massacre was completed in less than a month. And now the very children of the victims of the Hama massacre are mobilizing to bring down the same tyranny that murdered their parents.  The chances of  this movement cooling down are very small  – too much blood has been spilt in almost every corner of Syria for anyone to have the right to call it off. It is a bone-breaking battle between a brave nation and a relentless tyranny. I only pray that the future will be brighter for this bold generation than it has been for their forebears.

A Jordanian Muslim Engineer that his concerns don't only circle around numbers ...