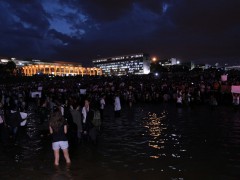 Barely a week into London’s post-Olympic stupor, before the stardust had settled, a lanky, middle-aged man emerged on the ground-floor balcony of a white stucco-fronted, red-brick building on Hans Crescent, Knightsbridge. The flowing snowy hair had been replaced by a crew cut, but there was no mistaking the body language—this was Julian Assange; bold, controversial, defiant. Assange, who is wanted for extradition to Sweden, had been ensconced in the Ecuadorian embassy for two months, as he awaited the South American country’s approval of his request for political asylum. Four days prior to Assange’s dramatic appearance, Ecuador’s foreign minister, Ricardo Patino, announced that he had received an “express threat, in writing” that their embassy in London might be stormed if Assange was not handed over.

As diplomatic tensions between Britain and Ecuador have grown, so too has the chorus of condemnation. American commentators regularly denounce Assange, while his erstwhile sympathizers, The Guardian and The New York Times, have both run smear campaigns against him.

It goes without saying that those who place him on a pedestal have much to defend. Assange is far from saintly; he is arrogant, obstinate, quick to berate others. He courts attention with an unbecoming eagerness, and affects a messiah complex. Then there is the outmoded chauvinism, and the sexual offences which he allegedly committed during a brief residence in Sweden. It is ostensibly on these grounds that its government is demanding his extradition.

Assange is admittedly not the most agreeable messenger, nor Wikileaks the most sophisticated tool. Its indiscriminate broadcasting of cables have undermined efforts towards democracy and regime change in various parts of the world; they have seriously endangered numerous activists risking their lives to champion the very same liberal principles Wikileaks espouses. No one denies that it exposed the callousness and presumption of the diplomatic establishment, and that it rightly embarrassed several deserving politicians. However, Wikileaks failed to open the floodgates for a torrent of other activist whistle-blowing organizations, an outcome which its adherents, including Assange himself, had hoped for.

More crucially, Wikileaks has not altered the machinations of the political elite, whose modus operandi of furtiveness and exclusion have been left undisturbed. On the contrary, government agencies and ministries, outraged by the entire debacle, have consolidated their shrouds of secrecy, providing even more latitude to those who reside along the corridors of power.

On this evidence it may be appealing, even reasonable, to conclude that Wikileaks, for all its exuberant idealistic promise, should be consigned to the scrapheap of mitigated failures. But to do this would be to miss the forest for the trees. It would also mean squandering momentum so painstakingly built, so painfully vital to addressing the most pertinent and fundamental issue confronting us today: the democratic deficit.

Opaque policy-making and a plutocratic culture (which involves co-optation of financial, industrial, and intellectual elites) have eroded public trust in their governments. Evidently, this is not a one-way street; governments also distrust their people. Meaningful issues, many of international significance, have been deliberately excluded from the public sphere of discussion. U.S. citizens, for instance, are largely in the dark about why Washington refuses to sign and carry forward the Kyoto Protocol, a global consensus which an overwhelming majority of Americans support. But to the ruling elite, there is little contradiction: Why should information not be made scarce? After all, such decisions are obviously far too important to be trusted to ordinary citizens.

This dynamic is underpinned by systematic marginalization, which is grossly unjust and by itself would demand remedy, but an even stronger moral objection exists; the expropriation of critical information and decision-making power deprives the populace of their right to form their own considered opinions. The latter consequence represents the greatest threat to the preservation of robust democratic institutions and traditions.

When Julian Assange stood on that balcony, Evita-like, it was a poignant and timely reminder to us all, of the accountability of governments to its people, and the grotesque manner in which that principle has been turned on its head. Yet there is reason to be sanguine. Rising levels of technology and literacy have abetted greater awareness of critical issues and free exchange of ideas, giving rise to popular movements across the globe. But we must remember that our march towards social justice borne of democratic values cannot be a languid affair; it requires unwavering dedication, unglamourous day-to-day engagement, and perhaps most arduously of all, silent sacrifice.

Timothy Cheah is a member of Global21, a student network of international affairs magazines and a partner of FutureChallenges. A longer version of this article was first published in The Singapore Globalist.