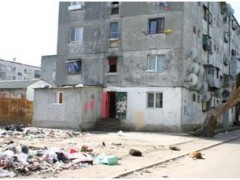 During the interwar period and all the way through the 70s, the neighbourhood was a bohemian marginal district of Romania’s capital, with typical one-storey houses and shady patios. Industrialization in the 80s led to the opening of several factories in the area. Displaced peasants from the countryside settled in dormitory blocks near the factories. When industry collapsed in the 90s, these four storey apartment buildings made of cheap prefab concrete panels were abandoned by their former residents and unemployed people from the countryside started to squat them. Often in connivence with ineffective and corrupt local authorities, an illegal real estate market developed in the district, so that now most of its residents not only don’t have any proper identity papers but also don’t have any documentation of ownership or rental for the apartments they occupy.

Authoritative data on this hidden community was almost non-existant until recent publication of a comprehensive research coordinated by Florin Botonogu from the Policy Center for Roma and Minorities (PCRM). The urban legend surrounding the Ferentari ghetto is now supported by figures: only one sixth of the apartments have gas for heating and cooking; under 20% have hot water; there is no organized trash collection and one third of inhabitants simply throw their rubbish out on the window. 80% of residents live on less than 200 Euro per month per household and cannot afford to pay for utilities or maintenance; and the perception among residents themselves is that approximately 70% of people living there are taking drugs – irrespective of their age.

What kind of lives do women live in these dire conditions?

The stories women in Ferentari tell about themselves, through the microphones and pens of NGO activists or the few journalists who dare to venture into the ghetto are sad beyond belief.

Elena is a bit over 30, married with seven children. She’s a housewife, and her husband’s been unemployed for the last three years. The entire family lives in a studio, with no gas or electricity, as they didn’t have money to pay the bills. To support her family, Elena works as a prostitute[1]. Her clients, usually truck drivers, often humiliate and abuse her. Her husband knows what she does. Recently, her 12 year old daughter also found out. This was Elena’s most humiliating moment. But she still says that she’d rather sell her body than burgle houses or mug people on the street.

Ana[2] is a 12 year old drug addict and prostitute. She was forced into prostitution when she was 11 and a half by her step father, also a drug addict. Her case is by no means unusual. Valeriu Nicolae – Romania’s most courageous and determined Roma activist and one of the few to be addressing the issue at grassroots level – says that these girls see the 200 EUR a month they make plus living expenses sometimes covered by their pimp as  a veritable “golden opportunity”.

Women born under a luckier star live in Ferentari, too. Ioana is a Roma woman in her early forties, who lives and works in the ghetto as a sanitary mediator. At the age of three, her parents divorced. She and her four siblings were raised by their mother and grandparents, in a less traditional Roma family. She was encouraged and supported to attend school, despite the overwhelming prejudice she faced because of her darker skin colour. After dropping school in the tenth grade, she worked as a cleaner and as unskilled labor in a cigarette factory. Like many other decently educated Roma women, she rode the wave of international Roma support programmes, educated herself further and entered the Roma NGO community. Her job right now is to create bridges between her less well-off peers in the ghetto and the public authorities, to raise awareness on health issues and family planning, to get proper papers for the people in the ghetto, etc.

Maria is also a resident of Ferentari, a Roma, and a mother of three. As a community leader, she’s fighting prejudice, lack of finance and complacency from the local authorities every single day. As a cofounder of the “Mothers’ Club”, a unique community grassroots initiative fostered by PCRM bringing together local women to fight for a better environment to raise their children in, she successfully convinced local residents to gather signatures and lobbied the city hall to open the first park in Ferentari. Thus, a risky area full of filth and scrap metal turned into a safe playground for the children of Ferentari, the first of its kind in the area. Maria is also an educational assist in an afterschool programme of the Policy Center for Roma and Minorities. She offers a different kind of role model to many children whose life outside school is an endless cycle of misery: poverty, violence, drugs, abuse. For them, she’s the hero on duty, who every day hammers home one line: the only escape from the ghetto is through hard work and education.

Because of women-led citizen intervention, the ghetto of Ferentari now has a playground where children can play safely. (Photo: Policy Center for Roma and Minorities, Used with Permission)

Ferentari has been flaking, crumbling and decaying bit by bit for many years now. The festering rot such decay produces forecloses the lives of children born into it before they have properly begun. Without massive grassroots community intervention, there’s next to no hope that the brighter destinies of more fortunate women like Ioana and Maria will outnumber the unspeakably grim fates of a majority like Elena and Ana.

[1] In Romania, prostitution is illegal. Women who engage in this activity not only have no legal or healthcare-related support, but they also risk being heavily fined by the police.