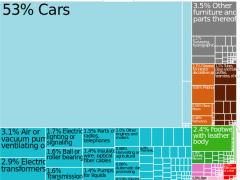 We’ve weathered our first opening up to free trade

The first experience of post-communist Slovakia with free markets was a big shock to our uncompetitive and poorly managed companies which failed to rise to the challenge. Over time, they have been replaced by new ones, often with foreign owners – the biggest foreign investors were Volkswagen and US Steel.

In the Middle Ages, the area now making up present-day Slovakia was a rich source of metals and wood. In modern times we started to import materials and energy for our own consumption so we naturally needed to export manufactured goods. Such a small country as Slovakia had to be – and still needs to be – connected to international trade.

Logically, our next big step was to enter the European Union (2004), followed by the Schengen and euro areas to enjoy a market with free movement of goods, services, capital and persons – despite the fact that for newcomers the advantages are sometimes unilaterally postponed for a few years.  Our average growth was about 6% and our exports doubled (from 29 bn euro in 2004 to 56 bn in 2011)

Structure of Slovak exports to the US in 2010. Image from The Observatory of Economic Complexity by Alexander Simoes, licensed under a Creative Commons Attribution-ShareAlike 3.0 Unported License.

The problem with exposure to international business comes when conditions are not fair. By “fair” I do not mean that conditions ought to be the same for everyone, because this is not possible.

Upon entering the EU, our farmers found that it is not only a market where they can sell their products free of any export duties, but also a place where other farmers, especially French ones, receive much higher subsidies. Because Slovak consumers, who are not as rich as those in other Western countries, prefer cheaper to better quality food, about half the food sold in Slovak supermarkets now comes from imports, and is often of worse quality than that sold in Western countries.

Actually, our deficit in food trade is about 0.5 EUR per citizen per day. In other words, last year we imported 10% more food than we exported.

One of the reasons for this is that, because we are now supporting the production of Italian and German farmers, we are now paying prices for rice and beet sugar that are double the world average.

What can TAFTA change?

US farmers also receive high subsidies. This (after the recent EU shock) could  be a source of future harm for Slovak farmers.

One main difference however between the US and Europe is that the Europeans are still unwilling to accept genetically modified food for direct human consumption. After the WTO, the Transatlantic Free Trade Agreement (TAFTA) could be a new platform that pushes Europe to accept GMOs.

EU law-making has a custom of repeating the vote until the “yes” is achieved and, if the yes can’t be achieved, of hiding it inside something bigger and more complex. Besides such risks, there is also the likelihood that documents underpinning the new agreement could contain formulations from previous failed agreements. The treaty might also try to harmonize the US and the EU patent system, in the sense of imposing a much stricter US understanding of patents – in the software branch, for instance.

On the other side, energy prices in Europe are higher because of EU environmental taxes and no one will reimburse us in part even when we export goods out of EU. The biggest producers like Slovak USS already enjoy subsidized energy – of course, labeled as green – to stay competitive.

Needless to say, it’s the taxpayer who always picks up the final bill.

If TAFTA comes on stream, the EU will be able to import cheaper energy-intensive goods and gas at a lower price because of fracking. And this in turn will probably increase prices in the US.

So how it will be?

It’s still not clear if TAFTA will be signed soon and what the details of this agreement are. The few former attempts at a transatlantic free trade agreement have all failed.

One of the future losers could be the Brussels bureaucracy, which turned the original EU idea of free trade on its head by creating an over-regulated administrative dinosaur. North Atlantic competition could force us to change this parlous state of play.

Since Slovakia has profited from European trade, I see no reason why it should not profit from transatlantic trade as well.

TAFTA will bring us more American “losers” like Mitt Romney able to buy the products made by our workers. We need these rich customers because Slovaks themselves are still not able to afford them.