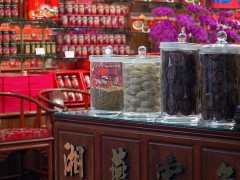 My first contact with Chinese medicine goes back about a year. I had terrible flu and a helpful Chinese friend of mine, worried about my health, gave me two mysterious pills, brought from China and wrapped in golden paper, and reassured me that they would make my body warmer and cure my flu. I don’t know how, but it worked. I promised myself back then that “the next time I get sick, I’ll check out a Chinese pharmacist.”

An epidemic of gastroenteritis, commonly known as stomach flu, decimated my coworkers this past December. By the third week of January, when the number of infected people started to drop, I found myself nailed to my bed with fever. I’ll spare you all the gory details of my illness and its symptoms, so let’s fast forward wind a little.

What worried me more was the pill combo that I needed to swallow in the next few days: an anti-sickness medicine to relieve the uncomfortable symptoms of a bloated stomach, a medicine against nausea and one to reduce fever.

Pills and prescriptions. After a visit to my French doctor. Photo taken by the author

However, the same article goes on to point out that the country is still one of the biggest consumers of antibiotics, and explains it by the fact that French doctors get paid according to the number of patients they see. Since “time is money”, it is easier to prescribe a pill than to explain the patients that they don’t actually need it”, the article claims.

While some Chinese medicines and medical practices appear to have found their way into Western pharmacies, more traditional ones don’t seem to interest the French. Sure, we have all heard how acupuncture and various herbal teas are supposed to be good for this and that, but we still don’t consider them as a primary health treatments, more as complementary methods. Finally, we are not educated enough: although only very few of us are able to understand the composition of  drugs given on pill packets, a white, neutral pill prescribed by your doctor is still pretty reassuring while some greenish mixture – which may be more healthy – is often frowned on as “mumbo jumbo”. The distinction between “real” and “Chinese” medicine is also rooted in French law: while individuals can “practice” Chinese medicine, they are not allowed to call themselves “doctors”

When I set out on my quest, I had the impression that Chinese medicine should be all over the city, especially in the Chinese neighborhoods. On the Internet I found articles about “clandestine Chinese pharmacies closed” and about “how illegal Chinese immigrants, who don’t have access to proper healthcare in France, tend to get their medicine from these Chinese herbal stores”. Probably there is more than one can see at first sight, but it is not at all easy for a non-initiated non-Chinese speaking person to find it. What’s more, at “normal” pharmacies in the Chinese quarter, the people behind the counter either didn’t know or were unwilling to tell.

When I recovered from the stomach bug, I did a little research trying to target “Chinese” pharmacies in Paris. Google, usually a friend of mine, misled me this time: three pharmacies described as “Chinese”, were in fact ordinary pharmacies in the Chinese neighborhood where “the staff speaks Chinese”. Another clue found on the Internet – a Chinese herbalist and pharmacist – apparently had closed, and when I attempted to reach them on the phone, a kind gentlemen on the other end told me that “it was a tourist agency now”. In the end I finally found a place that seemed open, a Chinese natural store, and decided to drop by. But to my great disappointment, the pharmacist told me “that he couldn’t give me anything for my stomach flu, but maybe tiger balm would help relieve the upset stomach”.

In the near future, there are small chances that this will change. Sooner or later, budget cuts will affect the health insurance system, and diminish the quality of patient healthcare. And the leaner meaner system will have even less room for Chinese medicine.