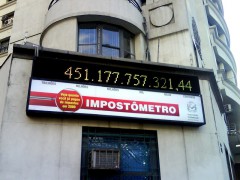 Impostômetro – a counter showing how much in taxes has been paid by Brazilians. Photo by Bruno Pedrozo on Flickr. CC BY 2.0

If you want to gauge the temperature of the current debate about austerity among economists, just hit “Reinhart Rogoff Krugman” on any web search engine. In the one corner we have Paul Krugman, equally famous for his combative column at the New York Times and his Nobel prize in economics. And in the other we have Carmen Reinhart and Kenneth Rogoff, two Harvard economists who have written extensively on government debt and its long term effects on growth. For Krugman, governments in the developed world should boost spending to save the economy from a prolonged depression, while Reinhart & Rogoff argue that piling up debt makes it more difficult for economies to grow out of the crisis. Recently, a coding error found in a data set used by Reinhart & Rogoff in one of their influential papers provided extra ammunition for Krugman and other austerity critics, but the question is far from settled.

Apart from the macroeconomics discussion, austerity also hits another nerve: wealth distribution. Government spending can be seen as an intertemporal transfer, with money being distributed today to some agents while at some point in the future the whole base of taxpayers will be responsible for repaying the debt created. Since the beginning of the crisis, the stock of government debt in most of the developed world has increased significantly, while unemployment has surged and the wages of the currently employed have remained more or less stable. At the same time inequality has risen markedly while stock markets have recovered their previous highs in various countries. Looking at these results, it is hard to justify the increase in government spending: the financial sector was saved, but at a very high cost for future taxpayers. We will never know whether the alternative (letting the banks fail) would have turned out worse, but the current recovery has been slow enough to justify a search for alternatives.

It is interesting to note that both sides on the debate are not happy with the current situation. Advocates of austerity think that the economy would grow more solidly without a high future debt burden while keynesians (such as Krugman) may argue that the problem is more about how government money has been spent than with the spending itself. In this sense it would be better to have written a check for every citizen than to have funneled money through banks and let them take the credit decisions. Either way, it is reasonably safe to assume that the ongoing pattern of government spending is not producing a desirable output and must be changed: cut or redirected (and perhaps increased).

The option of embracing some austerity, in my view, is reconciliation with reality. Most of the countries whose debt levels are critically high have borrowed their way to prosperity; some of their income gains were not followed by an improvement in their ability to generate cash flows in a strong currency, and this must be adjusted. Development does not follow a continuous path: there are times to recognize past mistakes and find an alternative and more sustainable future. Specifically, peripheral European countries cannot keep relying on the kindness of strangers to sustain their current product levels, nor can they keep kicking the can down the road, prolonging the recession and making imbalances worse.

Along with many other emerging countries, Brazil has had to swallow this bitter pill in the recent past: after inflation stabilized in 1994, the country was forced to embrace austerity, since one of the main causes of prices going out of control was fiscal imbalances. After several years of commitment to an ambitious target for the public deficit, the country’s debt / GDP ratio fell to a relatively low level. The benefits of the years of austerity could be felt during the 2008 crisis, when the country implemented countercyclical policies and did not suffer any impact from a weakening exchange rate in the stock of debt, since the stock of public external debt was by then practically reduced to zero.

Redirecting government spending towards citizens may be an alternative for some countries. Japan has been doing this for a couple of decades, and has managed to remain a rich country with low unemployment, at the cost of a huge government debt pile and companies giving up on making profits. Surely there is an adjustment to be done, but there is no urgency whatsoever in doing it, and society is cohesive enough to keep funding a deteriorating government balance sheet at low interest rates. Someday the time bomb of debt will explode, but most of the current taxpayers and voters will not be around to see the mess, and they will have lived relatively prosperous lives. However, not every country has an economy productive and competitive enough to pay for a generous welfare state. In those cases, the moment of facing the truth – in the form of debt defaults or currency devaluations – should come much earlier.

To sum up then, the choice between austerity and more spending looks like an intergenerational dilemma, and a good test of the ability of humankind to think ahead beyond a couple of years. Unfortunately a fair debate between generations is not possible, and changes are more likely to come as reactions to extreme and unexpected events than as fruits of reflection and consensus.