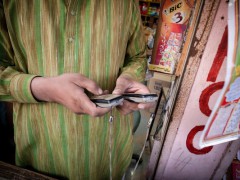 RINGING IN THE CHANGES: Comparing two mobile
phones and their mobile banking potential; The Reboot via Flickr

Some people are the bringers of new sounds. Whilst Elvis Presley sent the rumbling of rock and roll to the UK through the radio, Mo Ibrahim brought the dial tone to Africa through telecommunications and for the first time gave Africans prevalent, operating phone services. The billionaire entrepreneur said emphatically, “People in whole countries, they had never heard the noise of the dial tone, the noise it makes.”

The mobile phone has transformed the continent and has even replaced many Africans’ bank card and check book. The phenomenon of mobile banking taps into the fact that there are an estimated one billion people across the world who are not registered with a bank account but do carry a mobile phone, and allows phone users to deposit and transfer money through their cellular device. It hopes to bring the millions of ‘unbanked’ people in Africa into the world’s financial landscape; people who are without a bank account or access to regulated financial institutions.

The potential in Africa’s unbanked millions is not difficult to see, and Juniper Research estimates that mobile banking will grow into a $22 billion industry by 2015. In 2009 only 5% of Tanzania’s population had bank accounts. In Ethiopia there was one bank for every 100,000 people and in 2011 almost 80% of Africa’s adult population (a total of 326 million people) still didn’t use banks. The “unbanked” generally use a plethora of informal services such as moneylenders, supplier credit, and saving through animals or jewellery, but these options are insecure and often costly.

Low-income families are unlikely to be banked because it is too expensive for the banks; small transactions and remote locations mean that in many places transaction costs are often too high for banks even to set up an ATM machine. Moreover the paper-based banking system’s strong associations with literate culture alienates those less comfortable with formal letters, and may be a reason why only about 10% of the African population with primary or no education have bank accounts, compared with 55% of those with tertiary education.

Crucially however, it is these low-income families who need financial services the most, given their vulnerability to sudden events such as the destruction of crops. Current banking models in Africa, however, focus only on clients who make large transactions, a service that is centred on face to face interaction and provided by physical, traditional banks.

Telecommunications technology, therefore, changes everything. As a BBC report discovered, “Africa is the world’s fastest-growing mobile phone market, and in countries like South Africa, mobile phones outnumber fixed lines by eight to one”. In fact, Africa leapfrogged land line phone systems and developed astounding networks for mobile devices, creating a network that banking systems can use to piggyback. Setting up an account is easy; you register with an approved agent, show an ID card with your phone and deposit cash into your account. In the traditional system, bankers typically consider markets as viable once GDP per-capita surpasses £10,000 ($15,000 USD).  Mobile phone technology shifts these rates, lowering the benchmarks through devices such as prepaid cards and mobile phone accounts.

The transactions can be tiny; market traders use their phones to pay farmers for one bag of maize. The BBC reported that “one Masai farmer said that when he sells cows in Nairobi, he puts the money on his phone to ensure that thieves can’t steal his cash”. Mobile banking is also ideal for bank remittances from relatives abroad; just look at its success in Somalia, where a third of adults use mobile money and where remittances are a lifeline for the nation. One study found that 80% of the capital used for start-up firms in the country came from the Somalian diaspora.

Surprisingly, there are thought to be 1.5 million British adults also using mattresses, loan sharks, and pawnbrokers to deal with their money. More than half of these unbanked are among the poorest fifth of the population, and two thirds of those have tried, but failed to open accounts. Save the Children’s ‘UK Poverty Rip-Off’ campaign demonstrates the irony that people without bank accounts pay more for goods and services, and are more likely to encounter problems receiving benefits, wages, or even getting a job without an account into which wages can be directed. Bills are often more expensive when not paid by direct debit, and the predatory door-to-door lending market means that the UK’s poorest money borrowers probably pay the highest price for credit in Europe.

More than 90% of the British population do, however, have access to mobile phones. It may be that mobile banking is not only a ‘solution for Africa.’ It might just be a solution for the world.

Elizabeth Culliford is a member of Global21, a student network of international affairs magazines and a partner of FutureChallenges. A longer version of this article was first published in The Oxonian Globalist. Elizabeth studies English Language and Literature at St Hilda’s College, Oxford University.