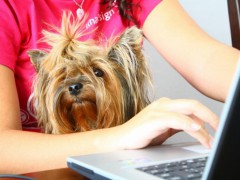 Every year all the world celebrates International Women’s Day, a day that showcases the economic, political and social achievements of women.

Less than a hundred years ago women in Brazil didn’t even have the right to vote. But nowadays a woman named Dilma Roussef governs the country. The “weaker sex” has been slowly gaining its rightful place in society and taking on major positions of responsibility in the business world.

The growth of industrialization in Brazil has brought about an urban transformation which has increased the country’s productivity and resulted in a lowering of the birth rate in families which has paved the way for the entry of women to the labor market.

Brazilian women are increasingly participating in this market where they are proving to be an important force for economic growth.

In my household my mother is the economic superpower who has to provide food for 3 mouths, herself, my sister and me. Not to mention our two puppies.

The workforce in my house and one of our puppies | credit: Carine Felgueiras

The effective participation of women in the world of work paints a picture of the conquest of freedom and respect in society, a society that is making room for  more and more female employees and employers.

I decided to be my own boss, start a business and provide support for a group of designers in my creative studio. Many of Brazil’s entrepreneurs are women, but they are mainly concentrated on the informal market. An informal company is one whose accounts are not clearly separated from family accounts. So women lead and generate and distribute income as freelancers, beauty parlor owners in poor communities or hawkers whilst also continuing to exercise their traditional job of family care. Today many Brazilian women are responsible for the care and support of their home, their children and even their husbands. They sustain the family, buy the family home and build social and financial independence. These are the values that most Brazilian women seek for in their lives.

Besides entrepreneurship and setting up their own businesses, women have begun to occupy positions never before occupied by females. In a country where the saying “the woman at the wheel is a constant danger” is still a widespread “joke” that causes  much laughter, being a bus driver is a great achievement for a woman and large numbers of women have now moved into this traditionally male-dominated profession. The advances made by women are even clearer when we look at women assuming important positions in companies. One prime example here is the Petrobras, a semi-public Brazilian multinational energy corporation, the largest company in the southern hemisphere in terms of market capitalization and the largest in Latin America measured by its 2011 revenue. And since February 2013 this corporation has been headed by a female president: Maria das Graças Foster, who is not only the first woman head of the company but also the first woman in the world to preside over an oil company. What a great sign of women’s changing status!

Women who yesterday cooked the family dinner, washed her husband’s clothes, and gave the children lunch, have now by no means shunned  the tasks and duties of the traditional “housewife” profession; they have begun to take on even more functions and obligations. These spirited and resourceful warriors manage their households whilst also holding down a busy schedule of positions and obligations.

These Brazilian working women are mothers (like mine), wives, housewives and successful entrepreneurs rolled into one.

To achieve such success and growing recognition, women spend what free time they have attending courses to improve their level of education with the aim of creating better opportunities for themselves and their families.

Even so, despite all the achievements of the women’s movement, women still continue to earn lower wages than men in the country even though they are a more dynamic force for the development of Brazilian economy. But leaving aside the battles and skirmishes of the war of the sexes for a moment, women like Dilma Rousseff and Maria das Graças Foster are still shining examples of the vital role women now play in driving the economic future of Brazil.