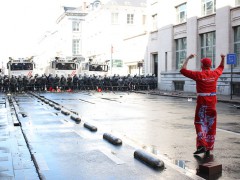 In my daily routine of reviewing the world’s media, I often hit across one particular thread. In European media, its key words have been crisis, depression and – increasingly prominent since early 2011 – austerity. From Le Monde to the Economist, austerity has been discussed and revered, explained and disdained by countless authors. As a student of economics in such a time of crisis, I have constantly had my understanding of “austerity economics” enriched by new perspectives which I found were all underpined by one constant – the disconnect between austerity policies and the politics of austerity. But let me explain.

Austerity as an economic policy is part of wider body of knowledge, related to fiscal policy, public finance and economic history. It relies, for instance, on econometric models measuring the impacts of the fiscal multiplier or the trade-off between government expenditure and growth, as well as on observation of past economic events. Such events include the leading example of the Latin American debt crisis, which has inspired a number of economists and served as a laboratory for improving our economic understanding of debt crises. However, austerity politics go far beyond such a technical, almost academic scope because they are bound up with the democratic aspiration of peoples to development and economic welfare, and with the political game played out between the elected government, the opposition and civil society. In Europe’s case, politics bring many layers of government into play as well as foreign governments which turns the politics of austerity not so much into a reflection of the merits of actual austerity policies but rather into a mirror of interests and frustrations from Berlin to Lisbon.

An anti-austerity demonstration in Brussels. CC-BY-SA-3.0. Photo taken by M0tty on Wikicommons.

The Latin American debt crisis originated in the 1970s and extended into the 1980s, a time often known in the region as the “lost decade”. Latin American countries had incurred high levels of debt in the previous decades while investing heavily in infrastructure and industrialization, and had reached a point where their foreign debt exceeded their power to repay. Driven by both regional and external conditions, countries found themselves insolvent. During the recession in the 1970s and 80s, with the sharp rise in oil prices, Latin American countries saw themselves facing a desperate liquidity crunch. Debt restructuing was necessary to avoid financial panic, and this typically involved new loans under very strict conditions, including the requirement that the candidate countries accept a set of policies from the International Monetary Fund.

At the time of the Latin American debt crisis, there was hardly any historical experience of a similar event to compare it with, nor was there any deep economic understanding of other debt crises. The economics of public finance were in their infancy with few empirical studies around. The idea that austerity policies were the best way to deter a debt crisis was defended mainly by the International Monetary Fund, with a few dissonant voices being raised in academia or policy circles. Thus the main opposition to austerity emerged from non-policy actors such as civil society organizations and politicians who saw the effects of austerity as undesirable for the citizens of Latin America. In the fight against austerity in Latin America, political considerations clearly outweighed policies.

Bankers in front of the IMF. CC-BY-2.0. Taken by Elvert Barnes on Flickr.

However, when I follow the news about the European debt crisis, I see fewer arguments against “IMF imperialism“ and more space given to economists who underline the negative effects of austerity policies with studies and data. Krugman and Stiglitz  are just two of them who have become household names. Politicians opposing austerity quote figures from studies, some of which are directly inspired by the Latin America story.  Actually, even the IMF itself has come to question the effect of austerity policies on growth and as the best strategy to break with the logic of a debt crisis. These facts suggest that austerity politics are being enriched by the understanding of austerity policy which is leading Europe to clearer thinking on what is the best way to economic recovery. While some conservative politicians and institutions continue to defend austerity in the name of politics, their voice is diminishing while society at large asks for numbers, concrete answers and quick action.

After failing to predict the 2007 financial crisis and incurring the rage of the world, this might be the opportunity for economists to recover confidence in Europe – and in economics itself.