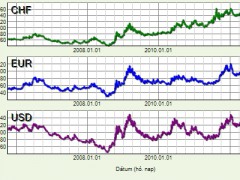 Over the past few years, Hungarians have spent far more than they could afford. Now the government is trying to save them from the consequences of the financial crisis and their own irresponsibility. But is it really a good idea to be such a nanny?

Before the financial crisis, bank loans were quite cheap in Hungary, especially loans in foreign currency, the most popular of which were Euros and Swiss Francs. The fall of socialism left people fed up with planned economies and socialist style industries and deeply frustrated by not having enough money to buy the products and living standards of the Western world, ideals they had dreamed of for decades.

So when the chance came along, they started to take out cheap bank loans, very often in foreign currency. Nobody cared about the exchange rate risk – except the banks which wrote the contracts very carefully. In the end, when the financial crisis arrived in Hungary and the Hungarian Forint (HUF) started to weaken at an alarmingly fast rate, those mired in debt found themselves in a sticky situation.

This situation has still not worked itself out. The crisis is not over yet, the exchange rate remains high, so the level of debt remains high as well. In September 2011 the government tried to solve the problem by allowing debtors to pay back their mortgages in one amount – if they can – at a fixed exchange rate: 180 HUF for one CHF. The chart below shows the difference between the cap and reality: at the time the government started to implement the 180 cap, the exchange rate for the CHF was already around 230 HUF.

The proposal sparked a heated debate. Critics said that the banking sector couldn’t handle such a move. At the same time, very few people had enough savings to pay back their mortgage, even at a lowered value.

And who should finance this plan? The government said the banks should – but the banks would then devolve this cost somehow on other debtors, to those with a Forint loan and those who cannot repay their debt in one amount – which means that those in real trouble would not be helped at all.

In the end some 160,000 new contracts were signed by the deadline (end of 2011), under the pay back the mortgage in one amount scheme. A quarter of these have taken out a new loan (this time in Forints) to finance this step. Meanwhile the government has started a new program, very similar to the first one, with fixed exchange rates for bank loans taken out in foreign currency, but for a longer period.

A number of questions that need answers arise when we look at this situation. Should the state help its irresponsible citizens move on with a fresh start? Should such a move be financed by the banks or by those responsible taxpayers who have shown more restraint? Or should the state do nothing and just let people suffer the consequences of their own irresponsibility?

Whatever answer you give to these questions, they also apply on a higher level too. Should the European Union help member states in a similar situation? And if so, who’s going to pick up the bill?