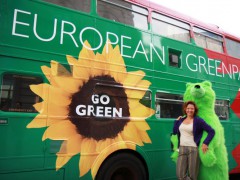 If growth is a dead word in Italian political debate, as discussed in my previous article on Austerity for Growth?, it seems that political and social awareness In Italy is also very low when it comes to sustainability issues.

The Green Party disappeared together with the Rainbow Left in the 2006 elections and currently green MPs in the Italian Parliament are mostly to be found in the ranks of Left Ecology and Freedom Party (Sel) even if a figure such as the current co-president of the European Green Party, Monica Frassoni ,did not manage to be elected at the Italian Senate. The Five Stars Movement’s political success in the last national elections actually brought an influx of environmentalist MPs into the Italian Parliament. Concepts such as “degrowth”, coined by economics professor, Serge Latouche,   have started to figure in political debate.  For the record, Maurizio Pallante and his Movement for Happy Degrowth have been the great inspiration for the Five Stars Movement and not Serge Latouche and the founders of the Degrowth Association such as Mauro Bonaiuti. But does this mean that a green wind is now blowing through the country?

If we look at the 2013 OECD’ s Environmental Performance Reviews about Italy we can see that in terms of the reduction of CO2 emissions and protection of biodiversity, Italy has done well despite the financial crisis which began in 2008. Nevertheless, challenges such as soil erosion and land contamination remain on the table. The OECD report also outlines relevant regional differences from North to South. One unwelcome but strong player in this match is organized crime, whose “waste management” has had dramatic consequences especially for Campania and which has also turned ‘Green’, by penetrating the renewable energy business in wind farms.

If there is one thing that the current crisis is bringing into stark relief, it is just how unfit the Italian system of production is to compete in an increasingly globalized world. Some of Italy’s most astonishing economic performances date back to the 1970s-80s, and are attributable to the high devaluation of the Italian lira and the tremendous acumen and proficiency shown by the small and medium-sized enterprise sector. Yet the Italian production model focused on SMEs seems to be history and it may now be high time to bring it back.  Securing the national territory against the hydrogeological instability for example, and investing in the green economy could be a winning strategy both for generating new job opportunities and combatting the economic interests of organized crime.

Debate about the high unemployment rate is of course being waged not just in Italy, but across the whole Eurozone and EU. Actually a Green response may represent the kind of New Deal that seems to be required for the European case. In fact, Europe 2020’s strategy aims nothing less than reaching sustainable growth. In the Italian case, even though adoption of sustainable practices is on the increase, in the agricultural sector and in the attitude of the general public the cultural challenges posed by sustainability still need to be addressed. The Five Stars Movement’s reliance on environmental issues is definitely topical, but their electoral success was much more related to their criticism of asperity/austerity measures and massive popular discontent with the whole of the Italian political class.

We cannot choose growth over sustainability; the two need to go together in order to succeed in the long term. There are no exceptions to this rule, as China’s example of combining sustainability and growth shows. If the new rising economies can accept such a challenge, why cannot European countries? A higher degree of European integration is needed anyway in order to implement such a scheme on a massive scale. In the Italian case, proper governance and interaction between the state and the territories is needed to apply such a strategy on the national level. Fabrizio Barca’s reports about reform of the cohesion policy and his political memoir may actually offer some useful guidelines at the European and national level for developing a sustainable growth approach between the center and the territories.

Italy’s role may be a key one in this context, even if the country is one of Europe’s ‘black sheep’ when it comes to the Growth vs. Sustainability’ match. There are some encouraging signals for sure, but the match is still far from being won by the sustainable growth side.