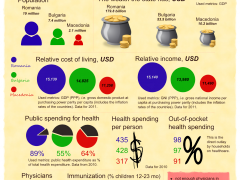 With scary news about the “financial crisis shaking the world!” making the headlines every second day, you can easily end up blaming the godawful traders for every single bit of wrong-doing. Or Greece. As time goes by, I more and more have the impression that everyone around is turning into a life hacker: tinkering with life habits to avoid a disease has become a regular mission.

While the poverty gap continues to widen between member states of the eurozone, jobs in the south-eastern part of the European Union (EU) are vanishing at an alarming rate. We have all heard about those mind-blowing budget cuts such as the end of funding for the Erasmus educational exchange program. Generalized austerity is praised by most of the iron fists in European governments as the panacea to the financial crisis although its implementation is controversial and its effects are far from obvious. Which is only logical given that austerity measures are not imposed on the cradle of the crisis: traders and their ilk.

Having said that, does the crisis impact healthcare? “Life was better before…”, as the adage goes, whispered in a sigh of regret that fleetingly animates an otherwise nostalgic face. In fact, no, it really wasn’t: the Euro Health Consumer Index (EHCI) 2012  has detected only some very moderate traces left by the “financial crisis” on healthcare systems in Europe at large. The “good old days” in fact never were: “healthcare traditionally used to be very poor at monitoring output, which leads healthcare staff, politicians and the public to overestimate the service levels of yesteryear!”

Even so, the situation is not equally bad throughout Europe. Surprisingly, some East-European EU member states are doing well (more specifically, the Czech Republic and Slovakia). This improvement is astonishing considering their much smaller per capita spending on healthcare. No fabulous news for Bulgaria and Romania though: despite entering their 6th year as EU member states, they  stay consistently stuck in the doldrums as a closer look at economically-relevant and quality indicators reveals. Lastly, as Macedonia is a candidate and a direct neighbour of Bulgaria, including it also seemed relevant.

In all three countries, government spending on healthcare is between 6.9 and 7.1 percent, hardly more than those notoriously bad performers Latvia and Serbia. By way of contrast, Western member states not only have far bigger state budgets but also allocate at least 10 percent of them to healthcare. Another noticeable tendency is that out-of-pocket spending is huge but overall spending on health is low, in other words people do not often go to the doctor but when they do so, it costs them a packet. (The alternative explanation is that the population as a whole in all of these 3 countries is in the very pink of health and so has no need for doctors and medicines, but I have doubts about how valid this might be.) The number of available physicians — regardless of whether they operate in the public or private sectors — is appallingly low: only Bulgaria comes close to the average number of physicians in the EU (3.8 active doctors for 1,000 people). Not only do Macedonia and Romania severely lack physicians but there is also a difficult-to-bridge gap with countries such as Greece or Austria (6.2 and 4.7 per 1,000 population, respectively). Last but not least, immunization seems to be on the decline especially in Romania which poses a threat to public health as a whole: vaccines are — even today — still the only line of defense against many debilitating and often deadly diseases. A slow-down or full stop to child immunization thus carries the real danger of a resurgence of ugly diseases like measles.

But all these figures do not give the full picture. The EHCI 2012 offers some insights into the quality of healthcare provided in each country. Needless to say, I was not expecting miracles. I must confess, however, that I had quite a struggle as all the relevant indicators I wanted to include were depressingly bad.

The head with the frizzy hair standing on end isn’t there by chance: it mirrors my own consternation when reading the report. Patient rights are improving in a growing number of European countries and encouraging legislation changes are being reported for East-European countries as well. But in our three favourite countries shoddy medical quality seems to be the standard. Bulgaria, Macedonia and Romania – along with Albania, Serbia and Latvia – are also the places where people spent the lowest amount of money per year on health (below USD 1,000, whereas in continental Western Europe and Nordic countries annual spending on healthcare generally comes somewhere between USD 2,700 and 3,700).

What if there was a treatment for bad healthcare: would our governments be able to afford it?