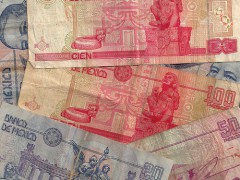 A struggling middle class watched from the sidelines while Congress mangled a ‘miscellaneous fiscal reform’ through the Senate and passed it in ‘fast-track’ mode, creating great concern among millions of households.

When Mexico’s President Enrique Peña Nieto took up office in 2012, he came in embracing his role as the modern face of his party (PRI) with a series of aggressive reforms to present to Congress, aiming to achieve a 3.4% increase in economic growth in 2013. After realizing he never could achieve such an ambitious goal, Peña turned instead to pushing for a ‘miscellaneous fiscal’ reform package. This reform that passed through Senate in late October in  ‘fast-track’ mode, includes a controversial package of austerity measures, such as higher taxation in pursuit of a ‘more responsible budgetary policy’. The tax overhaul is meant to strengthen Mexico’s economy and ‘help boost a growth rate that has lagged behind in other major emerging markets’. However, it has also been the cause of great concern in millions of middle class households.

In June 2012, the National Statistics and Geography Institute (INEGI) published a report which shows that 39.2% (44 million people) of Mexico’s population belongs to the middle class, and that many of them risk dropping into that lower class of the 59% of the population who live in poverty. Most middle class households in Mexico have a monthly income of between 730 USD and 1,000 USD and spend around 885 USD.

However, it’s important to note that in 2012, INEGI released data demonstrating that not all middle class or employed citizens in Mexico are, in fact, taxpayers. Mexico has 39,477,815 middle class taxpayers, while the total employed population amounts to 49,549,331 people. If these numbers are correct, they suggest that there is a large proportion of Mexicans still living in economic informality.

Peña Nieto’s new tax law wants to ‘make Mexico’s society more equal’ and is driven by the belief that the ‘wealthier’ should pay more, and that tax increases should ‘equally’ impact people on every rung of the middle class ladder. A combination of a tax increase on middle class wages, taxes on sugary drinks and junk food in a feeble attempt to fight obesity, and a general tax increase on housing sales, border states and small businesses, among other measures, have got Mexico’s middle class seriously worried. Such proposals don’t only display a lack of innovation and creativity in evolving alternative solutions for enlarging Mexico’s tax base and – even more to the point – for incentivizing Mexicans living in economic informality to join the financial system as new taxpayers; if implemented they would also push new members of the middle class down to a much lower rung on the ladder of economic prosperity.

Opting to ‘borrowing’ a house – a common practice in lower social strata – instead of buying a house could become a new reality for those families choosing to avoid paying a 16% tax on the total worth of their new home, thus creating critical living conditions. The Senate passed a 16% tax on the acquisition and sale of new and used housing after wisely dropping the original proposal of adding taxes to rent and mortgages in addition to the aforementioned 16% increase. This new tax increase could further stem the already low rates of home ownership among lower middle class people.

Additionally, the Senate has officially passed a new value-added tax on border states, hiking it  from the current reduced rate of 11% to the standard rate of 16%, with the argument that these states have a ‘higher income’ than the rest of the country.  This will increase tax on assembly plants, or maquiladoras, raising the tax burden to eight times its current level. And since maquiladoras are the main exporters after the oil sector and the main industry in border states, it is forecast that two million employees could lose their jobs and an 18 billion dollar annual loss be inflicted on an already struggling industry.

What’s more, in an attempt to encourage small and medium-sized  enterprises – the main source of employment –  to join the financial system and leave informality behind, the tax bill invites them to join the financial regime in a gradual way and pay standard income taxes from which they were previously exempt. Its objective is that by the seventh year they will become formal income-tax-paying small businesses. Yet small businesses with an annual income of around one million pesos (76, 923 USD) will have a hard time adapting to the conditions of the new fiscal regime. According to consultants RSM Bogarín, they’ll be caught up in a rather complicated administrative process where some of them will not be fully prepared for calculating their taxes or tracking their fiscal history,  a process which could discourage them from taking part in our financial system and make them opt for already ingrained economic informality.

On a similar note, those small and medium-sized enterprises which offer their employees workers’ benefits could previously deduct these in full from their income tax. Under the new fiscal miscellaneous reform, only 57% of such benefits can now be deducted. Thus there is a risk that employers might now be discouraged from raising employee benefits or even hiring new workers. Not only that but they could choose to informally ‘hire’ new staff, a common practice which again creates critical working conditions.

Adjustment measures like the ones applied in Mexico are hitting its middle class hard. It is not clear how these measures are meant to reboot the Mexican economy, since they offer no real incentives for investment. In fact they are producing a decline in investment, especially in the border states, as neither business nor investors see any clear, transparent and fair tax revenue system. These adjustment measures in Mexico, like tax increases, do not offer any real benefits to citizens nor do they guarantee good use of public money. They do not seem to make Mexican society a more equal one, while demands for higher taxes on a small number of taxpayers could push them over into economic informality, leaving those on the lower rungs of the middle class ladder even more exposed and vulnerable.