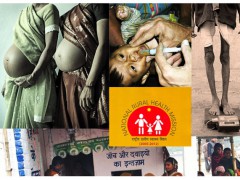 Far from the madness of city life, a child lies limply on a hospital bed, suspended somewhere between the brutality of life and the sick sad humor called democracy, watching the ceiling and wondering will he be forgotten like the other patients sharing that inhospitable room in a run-down hospital or will he survive and  fulfill his dreams.

This is the story of every child in all the villages, small towns, and cities across India. Every year and in its 5 year plans, the government announces health benefits and promises to strengthen the healthcare system. And every year hundreds of children and adults end up facing a life full of uncertainty. It seems that the current healthcare system just serves the growing needs of metropolitan cities but even there, it plays a cruel joke by being accessible only to those who can afford it.

Lack of healthcare facilities in rural India is the major reason for high mortality. Photo Collage by the author (CC BY-NC-SA 3.0)

According to a report by the United Nations, 75% of the health infrastructure in India  – including doctors and specialists and other health resources – is concentrated in urban areas where only 27% of India’s population lives. The rural population of India is around 716 million people (72%) and yet there is a chronic lack of proper medical facilities for them. This is one of the reasons for the differences in urban and rural healthcare indicators.

The table below shows the disparities in healthcare indicators between urban and semi-urban and rural populations:

Key indicators of the healthcare system in India.

The majority of these statistics show the sad state of affairs in the rural healthcare system in India. The fact is that most people living in rural areas or small cities and towns across India don’t have access to critical medical facilities including hospitals, medicines, and doctors. Ensuring proper medical care as well as preemptive care facilities is mentioned regularly in every 5th year plan but somehow the plans all end up being shelved and every year economists come up with new death statistics. So where are we going wrong?

One of the most critical requirements for healthcare in rural areas is doctors. Doctors and medical specialists are an integral component of the Indian healthcare system but rural India is currently facing a 64% shortage of doctors.

Today, rural India faces a shortage of more than 12,300 specialist doctors. There are vacancies for 3,880 doctors in the rural healthcare system along with the need for an astounding 9,814 health centers.

The rural health care system in India  has been developed as a three tier system comprising of the following:

2.The Primary Heath care centre(PHC)-A referral unit for 6 (4-6 bed) subcenters staffed by a medical  officer in charge and 14 paramedics.

3.The Sub Centre-The most peripheral point of contact between the primary health care system and the community, staffed by 1 Health Worker-Female (HM-F)/Auxiliary Nurse Midwife (ANM) and 1 Health Worker-Male (HW-M).

Rural clinics like this one in Assam lack a strong infrastructure.
Photo by the author (CC BY-NC-SA 3.0)

Some of the key facts relative to the current state of the rural healthcare system in India have been highlighted in a report by the National Rural Health Mission (NHRM). They are:

These facts are for real, and the reasons behind the poor healthcare infrastructure can be attributed to lack of investment incentives for the private sector, gross inefficiency in public healthcare system, and a chronic lack of quality doctors and medical professionals.

Is there any hope for rural India?

Yes, there is still hope but the government needs to work harder. It needs to implement a clearly defined policy with a set of guidelines that will aid in ensuring the sustainability of rural healthcare plans. This will help in attracting private investment in the rural healthcare segment including tele-medicine services, remote diagnostics, and operation of other rural health services. Above all, rural healthcare needs to be declared as a “priority” growth area by both central government and the state governments.