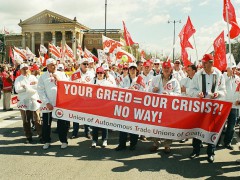 When economic growth is not a given anymore, how can democratically elected governments trigger growth, maintain the welfare state and keep public spending down all at the same time? The answer is easy: they simply can’t.

European welfare states have come to a crossroads. On the one hand, private investors are no longer willing to finance runaway public debt. And on the other, as some politicians argue, tangible economic growth needs additional financial incentives from governments. But if the market won’t finance this extra spending, then who will? No one knows so far.

Demonstration of European labour unions in Budapest against austerity. An image by Habebee on Flickr – CC BY-NC-ND 2.0

Looking at austerity and spending, we can see a much bigger systemic problem that is rooted in the logic of Western democracy. In most EU countries elections are held every four years. So in theory at least, this is the timeframe within which an elected government should realise its economic program. The problem is that many much needed reforms would only further widen the gap between rich and poor. For example, aborted healthcare reforms in Hungary sought to make a drastic reduction in capacities in order to cut costs. Yet the benefits of such a radical retailoring of the system would haven been felt only years later.

This means that any government brave enough to introduce such reforms would also risk not being re-elected for another term. In other words, the very logic of our democratic systems prevents politicians from carrying out those very measures that guarantee our long-term economic competitiveness.

So when the president of the European Central Bank speaks of reforms of the labour market, what he really means is making it easier to hire and fire people. We have to face the fact: the era of the welfare state as we know it is well and truly over. If European economies want to get back their competitiveness and keep their living standards in the long term, they have to concede that many of the jobs they do can be done for a fraction of the cost in the Far East. This might be cruel, but in a way it’s only the logic of global capitalism, a product of the West, which is now turning on its creators.

Capitalism losing allure in the West. An image by Boodoo on Flickr – CC BY-NC-SA 2.0

You can fool the electorate for some time and go on spending blithely as Slovakia is now doing. But the story of Greece should ring a warning bell, not only for Slovakians, that you need to cut your coat according to your cloth. You can always do what the Hungarian government has been doing by taxing big business. The only problem with that is that it risks scaring away further investment from abroad.

In order to avoid a lost decade in Europe of stagnation in economic growth, not only the banks need reforming but the welfare state and the job market too. This does not mean that the current trend of the growing gap between rich and poor in so-called developed countries should be prolonged. On the contrary: If we want to live in a stable and sustainable society, we need to come up with ideas to narrow this gap.

What we need in Europe right now is a new social contract. A new agreement between employers, employees and the government, where employees restrain demands for higher wages, companies practice favourable employment policies, and governments put their fiscal balance back on track. Without this, few political parties will have the courage to put through radical changes that will kick in too late for them to get re-elected. Only time will tell if citizens are mature enough to see through the sweet but empty promises of populist politicians, and think not only of themselves, but of their children as well.