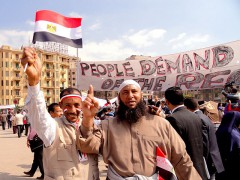 Egypt’s revolution –glorious, as it may be – has ruined our chances for healthy relationships, in my honest opinion. Let me tell you why.

During, and in the aftermath of the 25 January revolution which called for bread, freedom and social justice, and demanded the ouster of three-decade dictator Hosni Mubarak, Egyptian men and women suffered a great deal of emotional instability. After the initial state of infatuation, where emotions ran high and a sense of irrational, blinding love for country and fellow countrymen took over, came the heartache and let downs, leaving us with a sense of sheer loss

A forced hand-over of power in February 2011 to the Supreme Council of Armed Forces (SCAF), headed by General Hussein Tantawy, led the country into a tumultuous 16-month transition period. Under SCAF, flagrant human rights violations, including virginity tests, military trails for civilians, and bloody crackdowns on protests unsettled many revolutionaries who had hoped for real change towards democracy.

Then, Islamist parties gained a majority in parliamentary elections, and the presidential elections in 2012 brought long-time Muslim Brotherhood figure Mohamed Morsi to power. The people chose Morsi over Mubarak-era figure Ahmed Shafiq, displaying a desire for the revolution to bring about a genuine transition of power.

Yet, a series of unfortunate decisions, policies and events, including an ailing economy, frequent power shortages, violent clashes outside the presidential palace, the drafting of a constitution by an Islamist dominated committee in the absence of national consensus, and the release of a controversial decree that granted President Morsi sweeping powers, among other issues that do not bode well for democratic change, forced millions to demand Morsi’s ouster on 30 June.

Ask anyone on the streets of Cairo, and they’d tell you they have a love-hate relationship with the country. But the love (unrequited as it may be)- oh the love, is undeniable. And that makes the agony all the more amplified.

We are not merely spectators of an unfolding political mess; we are in a relationship with it.

Back in 2011, an entire generation shed its crippling helplessness and opted for hope. Yet when that surge of hope was not rewarded with the unbridled freedom it had dreamed, that entire generation experienced a let down akin to a bad break-up.

I used my limited, Psychology 101 knowledge of love and relationships and shit to try to analyze the assortment of psychological disturbances experienced by Egyptians today.

We now have: abandonment issues, daddy issues (“Think of him as you dad, dude,” notorious quote about respecting former President Mubarak) commitment phobia (we absolutely could not stay with Morsi for longer than a year), Stockholm Syndrome (wave to the army! What? The army exercised virginity tests on our sisters and killed our brothers in Maspero? No way!), and finally, heart-break. Adele’s grief-stricken lyrics couldn’t even do the pain held in the hearts of Egyptians justice.

The ultimate blessing/curse of social media means we get to know most of our martyrs, after they die, and we fall in love with them in retrospect, we mourn them in hindsight. These symptoms could thwart our relationships not only with partners and friends, but also, with our governments. A lack of trust, constant doubt, and paranoia will keep us all on edge for years to come, I believe.

There is one “condition” we suffer from today though that could end up being our salvation. I like to call it “illogical hope.”

Tahrir and love are closer than you might think. At least two weddings took place in Tahrir square; a beautiful bride in an untainted white gown, a groom beaming with disheveled merriment, with protestors for guests. Relationships were sparked within the square, people united over their love for the revolution.

What is it about the revolution/the Square that made it such a magnet for affection?

It is, the hope. The imagination. Every love is heightened by the prospect of it growing and growing, until it is the greatest love there is. Even today, plagued with abandonment issues, commitment phobia, Stockholm Syndrome, and heartbreak, maybe our salvation is in illogical hope.