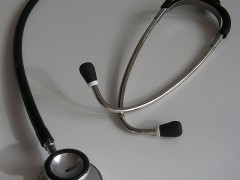 A Stethoscope, Photo by ernstl on Flickr (CC BY-SA 2.0)

Prevention is better than cure is an old saying but one that still holds true and on a much larger scale than one might at first think.  The economic burden that the health sector puts on the already mismanaged economies of third world countries could be substantially reduced by practising preventive medicine and educating the masses about health-related issues say medical students  and doctors of of Fatima Jinnah Medical College in Pakistan.

Ironically, the most common diseases are those which can easily be prevented if patients were only properly aware of the measures required to avoid such life-long physically and psychologically debilitating ailments.

Diabetes Mellitus– especially Maturity Onset Diabetes – can easily be prevented by healthy diet and exercise.  Awareness of the symptoms may also help in early diagnosis which prevents the disease from exacerbating and causing kidney failure or retinopathy associated with prolonged diabetes. The treatment for these chronic conditions is much more extensive and invasive than that required were the diabetes diagnosed at an early stage. Since the disease is very widespread, awareness about prevention could lead to a marked decrease in the number of sufferers. This would greatly reduce the amount of the budget required to treat diabetes sufferers and hence ultimately benefit the state.

Another problem frequently encountered in third world countries is that consulting a physician is only considered necessary when the symptoms become unbearable. Being ill is considered a stigma; although mostly associated with psychological illnesses, this has now come to apply to long- term and contagious diseases as well. In fact many patients are daily wage workers with huge families who cannot afford to be sick or take a day off and are unfamiliar with the idea of spending their hard earned cash on medical tests or diagnostic procedures of any sort. These people will not report to hospitals until the illness is exacerbated to such an extent as to cause severe physical impediment or discomfort.

Once again the root of all evil is illiteracy. If the state is to provide effective preventive therapy, it will first have to educate people about the effectiveness of such therapy and the positive influence it will have on their lives. This is a daunting challenge given the high rate of illiteracy in third world countries. Doctors/ volunteers would have to go from door to door explaining why taking a day off work to see a doctor for a routine check-up can be beneficial when people may argue that losing a day’s wages  when they are feeling fine is completely out of the question. Hence the government should try and provide better access to doctors, and doctors who are capable of handling patients who find the whole exercise completely futile. Healthcare information should also be provided to patients meaning information on procedures, diseases and treatments. And patients’ doubts and questions should be adequately answered to educate them in all aspects of the respective disease and the power of prevention.

Another major disease affecting a large percentage of the population which can lead to severe morbid side effects is obesity. The situation on obesity is that people are relatively more aware about the extensive list of diseases linked to obesity. Even so, whether obesity is due to the wrong diet or to ideas about relating how good a life you lead to the amount of food you eat, it is still prevalent in all circles of the population.

It’s not  just the health sector that obesity and its related diseases affect – obesity also results in a lethargic workforce and is generally associated with lower self-confidence. To avoid obesity, the government should launch a fully fledged campaign to educate people about the harm associated with it, and fast food restaurants should notify customers about the caloric content of all foods. Similarly, all packaged food items should be given caloric tags. Offices and other workplaces should provide gym facilities or at least some chance for physical activity, and schools and hospitals should underline the importance of exercise and a balanced diet. What the concept of a balanced diet is should be explained to the masses as most people consider that taking three meals a day, no matter what their content may be, is the daily requirement.

Lastly, the state should make sure that access to health care officials and doctors is easy for the general population, and the officials responsible should make it their duty to counsel people about prevention and the complications associated with the disease in its advanced state. It is also the responsibility of doctors that patients understand all aspects of the disease and what its aggravating factors may be. This would require improvements in patient-doctor communication. It is essential that doctors communicate well with patients – only then can the plan for preventive and diagnostic medicine be of any help to the state.