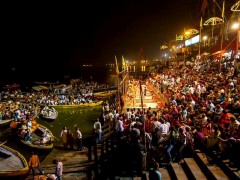 Religion and its old age rituals have always been a source of fascination for people, if not a source of devout enlightenment. However in the 21st century religious events, pilgrimages, in particular, have surfaced as an inexhaustible treasure for the new age economic globalization. From the glimmering streets of the Vatican City, to the bright lit Mecca to even the intriguing ruins of the Holy Land of Jerusalem – all these areas commemorating historic religious ceremonies continue to provide great economical value to millions of people not just from their countries of origin but also to people from across the world who host such events. The monetary worth of each pilgrimage to the indigenous people and to the country’s GDP varies though – it all depends upon the faith, the event and the region.

At 20 million visits a year, the “Ganga Ma” or mother Ganges is one of the largest pilgrimage sites. The Ganges represents life, purity and a goddess in Hinduism and it is believe that taking a bath in the Ganga cleanses one of all sins.
In the monetary benefits of the Ganges River, three towns, holy to Hinduism – Haridwar, Allahabad and Varanasi – attract thousands of pilgrims thus incredibly benefiting the area’s development and the indigenous people’s sustenance. Moreover the rapids of the Ganges are popular river rafting areas, attracting numerous people especially in the months of January and February to pay for the service of taking to the Holiest waters in the Hindu religion. Millions are made and spent through donations by devotees and through government funds to transform the land to accommodate its visitors, on lights, tents, food and for cleaning the river on the end of the Kumbh Mela. In addition to this through modern day cultivation of the Ganges valley in Uttar Pradesh and Bihar, irrigation benefits have increased the production of cash crops such as sugarcane, cotton, and oil seeds – all of which are widely exported by India to other countries.

Over 3 million tourists visit the city of Jerusalem annually. It is an important location for Judaism, Christianity and Islam. Religiously significant sites like Solomon’s Temple, City of David and events like crucifixion and resurrection of Jesus and Prophet Muhammad’s ascend to heaven make the region all the more important as a tourist destination for people of many different faiths.
The Western wall and the grave of Rabbi Shimon bar Yochai is one of the most visited destinations in the country which increasingly benefits the hotels, lodges and restaurants in the area as well as those in the surrounding cities like Bethlehem which comparatively provide a cheaper cost of living to visitors. Largest number of foreign visitors to the country come from United States, Russia, France, United Kingdom and Germany. The paid tourist attractions such as Masada and Jerusalem Biblical Zoo among many others have raised the revenue gained by tourism in Israel and the annual tourism by pilgrims has made this religious rite as a year round source of revenue gain for the country.

Around 13 million Muslims visit the city of Mecca in Saudi Arabia each year to perform Hajj, in addition to this millions visit throughout the year to perform Umrah – making Kaabah one of the largest pilgrimage sites in the world. Pilgrimage to the Khana Kaba “House of God” is believed to be as old as the times of Abraham and his followers however its outreach gained momentum only after Islam came through Prophet Muhammad.
The massive number of visitors have established thousand-year-old business in the holy city. Today the site comprises of luxury hotels, malls and apartments all of which provide world class services and goods for the use of the pilgrims at a respective price. In addition to this, due to visitors from around the world, trade market in the area is also very high with large sale of goods and souvenirs including gold ornaments, silver and perfume (Itar) among many other things. The Makkah Clock Royal Tower even presents the pilgrims the opportunity to buy name brand clothes, although as per the rites of Hajj, Muslims can only wear the Ihram (A simple white unstitched cloth) whilst performing the pilgrimage. The Hajj season and the yearlong Umrah bring forth billions of dollars for Saudi Arabia – contributing directly 3% to the country’s Gross Domestic Product.

The smallest country in the world and one of the Christian capitals of the world, the Vatican, is the no. 1 choice of Christians for a pilgrimage with a visit of around 4.2 million pilgrims annually. St. Peter died in the center of the Vatican circus and since then Easter week brings forth millions of catholic believers to gather for blessing of the Palms, procession and holy mass led by the Pope on Saint Peters Square.
The economic gain for the Vatican on Easter is ever high as it is the most sought after tourist destination by people of the catholic faith. The Vatican receives contributions from churches around the world (known as Peter’s Pence), thus making the Vatican’s economy exceptional due to its sole dependence on religious work alone. Tourists coming on Easter, visit religious shrines and view the art and the museums apart from this the sale of postage stamps and tourist mementos, and the sale of publications; all contribute to the economy of the Holy See. The major commercial activities, though, are also organized around religious concerns, the industry is governance of the Church and the trade is organized around religious goods supplied to Churches all across the world.

Around 17 million Shiite Muslims gather at Karbala on Ashura to commemorate the martyrdom of Imam Hussein, the grandson of the Prophet Muhammad, making this pilgrimage one of the largest ones. Ashura marks many things as believed by the followers: the creation of the world, Noah’s departure from the ark, Moses’ flight from Egypt but its worldwide recognition is mostly through the tragedy of Karbala where the grand children of Prophet Muhammad were butchered in 680 AD.
Economically the shrine of Imam Hussein presents Iraq with substantial in-state benefits such as that of tourism, growth in the trade market, farming and transportation among many other things. The sale of black clothes of mourning, especially shawls is incredibly high along with sale of precious stones such as aqeeq. gold, silver, diamonds and others are common at Iraqi marketplace and donation of these is also common at Shiite shrines. An incredible amount of Niaz & Tabarok (food given in the name of Prophet and his family) is given every day to the pilgrims especially in the days of mourning. Many pilgrims walk their way from as far as Baghdad and Najaf to Karbala, and many foreign pilgrims from Pakistan, India, Afghanistan, etc take busses which intern benefit the surrounding areas businesses. The extraordinary aspect of this pilgrimage is that its time frame is very long (1-2 months) and the areas travelled to by the pilgrims are not just limited to Iraq but often include Iran and Syria – all of which house the shrines of the members of Imam Hussein’s family who were paraded in a caravan by the Yezidi forces.

Our Lady of Guadalupe – Mexico

Every year nearly 10 million people visit Our Lady of Guadalupe Basillca making this Mexico City home to the most popular Marian shrine in the world, and the second most visited Catholic church in the world after Saint Peter’s Basillca. According to beliefs, the pilgrimage initiated after “Lady from Heaven” appeared to a poor Indian named Saint Juan Diego and identified herself as the Mother of the True God. It is believed she told him to build a church and left an image of herself on his Tilma, a low-grade cactus-cloth.
The festival of Guadalupe attracts millions of pilgrims to the capital of Mexico for religious enlightenment and celebration. Food, drinks, music and dancers are all part of the festivities which the pilgrims enjoy and therefore contribute to providing a significant amount of revenue for the indigenous population in the area. In addition to this custom costumes and religious clothing worn by the devotees along with statues of Mary carried by them brings a boost in the sale of cloth and in the service of tailors and sculptors respectively. Offering to the Church are also common and in this new age the festival of “Our Lady of Guadalupe” is now even on route to other parts of the world, last year coming to LA, California, whereby boosting the economy of other cities wherever the festival is taken.

In lieu of these fascinating sacred ceremonies and the millions of devotees who commemorate them we gain a glimpse into the economics of faith and how religion in its diversity is emerging as the new hope for economic globalization across the oceans.