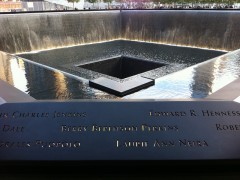 Ten years after the events of September 11, 2001, the Future Challenges authors reflect on the ways in which their own experiences have been altered. For some, the fallout has been strife and conflict. For others, the event always felt unnervingly irrelevant. And for some, it changed their lives in subtle but pervasive ways.

Corina Murafa in Romania: “Public opinion, from journalists and politicians to citizens at large, has simply shunned any alternative other than being America’s most faithful Eastern ally, waging wars in Afghanistan and Iraq side by side with it, praising neo-conservatism and denouncing any liberal[2], often anti-American speech as socialism with a guise.”

Peter Hagen in Jordan: “The wars in Afghanistan and, most sharply, Iraq have coloured the reception of those whose governments took part in them. Whatever my complex and contradictory views on those wars, they have done more to diminish the way Americans and their close allies are seen by the rest of the world than 9/11 itself.”

Patrick Corcoran in the USA: “The post-9-11 turn toward fear-mongering was not merely the inevitable consequence of the emergence of a new threat. It was the conscious decision of the political operators around George W. Bush, a decision made with enormous cynicism and subsequently emulated by many in his party.”

Dominika Ricardi in Australia: “It is time our leaders started demonstrating the values that we are proud to call Australian, such as ‘mateship’ and giving everyone, including Muslims, ‘a fair go.’”

Maria Farooq in Pakistan: “If religion and nationalism are so detrimental to humanity that they can sway the hearts and minds of millions of people and provoke them to enmity and bloodshed, then perhaps we are better off without any such philosophies or religions that societies continuously push us to live by.”

Mayxue Ospina Posse in Brazil: “Calling every kind of ‘criminal action’ that involves the disadvantaged population an ‘act of terrorism’ has become, in Rio de Janeiro, the main resort of official speech to hide the truth about the key social issues that simmer beneath the surface of the tourist view of the city.”

Oscar Guarin in Brazil: “The political opportunity created by the international crusade against terrorism was used by the Uribe government to amplify the danger represented by the FARC.”

Bhumika Ghimire in Nepal: “Love, understanding and mutual respect is the best way to honor the victims on the tenth anniversary of the 9/11 attacks.”

Artur Kacprzak in Poland: “I am afraid America is losing this ‘War on Terror’. And it is not a military, but a cultural defeat.”

Kennedy Kachwanya in Kenya: “This month as the US and the world mark the 10th anniversary of the 9/11 terror attacks on the United States, I look at the impact of an event which took place three years before that fateful day in Nairobi, Kenya.”

Delalorm Semabia in Ghana: “The fear of the unknown by way of security and a little resentment over the seemingly unjustified wars has tempered the love of ordinary Ghanaians for the US. Nevertheless, a brother remains a brother!”

Amaya Querejazu in Colombia: “We are getting used to living in a world where our innocence is not first presumed but must be proven, where the ends justify the means and where it is OK to accuse our neighbors…”