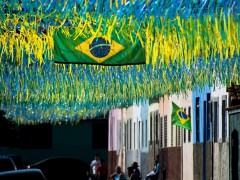 12th of June, São Paulo: floodlights, cheers, goosebumps, kick-off. Amidst social protests, a visit from the Pope and one year after World Youth Day; Brazil will host the second largest sports event in the world – the World Cup. Many have touted it as an event to bring many benefits to Brazil, but will that necessarily be the case?

Brazil has invested heavily, both financially and politically, to make the World Cup a reality. But despite efforts to stimulate key sectors of the local economy and despite attempts to improve the country’s global image; questions have arised of the appropriateness of injecting $13.3 billion into the event with the lingering social and economic problems Brazil faces. Can a nation with high levels of poverty and social unrest justify such an expense on a sporting event? Will the investment that Brazil makes into the World Cup pay off long term for the everyday lives of the Brazilian people?

The media and the government emphasize the progress that will be made from the investment into hosting the World Cup such as improvements to the airport, security and the economy. But locals are unconvinced that this will be the case. What is clear is that the world Cup has brought much more than just improvements in infrastructure, it has also brought deep divisions within society.

Many nations invest in large sporting events, such as India in 2010 and China in 2008, with the promise that not only will these events bring economic benefits but also that these events will leave cultural icons and heritage sites for the future and for people to enjoy, but will this be the case for Brazil? What do large sporting events such as the World Cup and Olympics give the community? And is it right to invest money into hosting such events, for potential cultural heritage, if the local community lacks access to basic services and resources?

We ask our bloggers, citizen journalists from Brazil and all over the world to showcase their views on heritage and sport. If you are interested in different perspectives on this issue take your pick from the Local Views below.

This post was written by Flávio Bezerra and Eike Leonhardt.

*Photo: published by Flickr user Thomás under a CC BY 2.0 license.

Flávio is a technology-addicted Brazilian experience designer. He has a BA in Visual Communication from the Federal University of Rio de Janeiro, and he is just finish with his master’s degree in Communication Arts with a focus on user experience, design thinking and new media at the University of Arts in Braunschweig, Germany. Flávio came to Future Challenges through the Global Economic Symposium, where he worked as editor helping to establish a stronger network there. His work focuses on a social approach to design, and he has a strong interest in the sustainable development of cities and society.

Most recent Local Views on ‘Patrimônio - Stories of heritage, empathy and soccer’