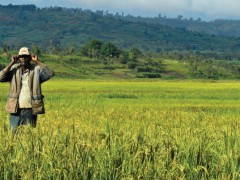 Land means different things to different people. While an economist might define land as the totality of natural resources in a given area, a lawyer might focus on boundaries and the mineral rights therein. But a farmer’s answer is likely to be simpler: land is the farmer’s capital. Land is the soil and water utilized in the production of crops for the local or global market. In the context of an increasingly globalized world, land rights are paramount – particularly in the Global South (Asia, South America, Africa and Australia). And as governments and multinational corporations buy up land, small farmers and indigenous groups are finding themselves edged out.

A 2010 World Bank study showed that 110 million acres (45 million hectares) of farmland worldwide were sold or leased in the first 11 months of 2009 alone; 70% of these land deals were concentrated in Mali, Libya, Sudan, Ethiopia, Madagascar and Mozambique, and evidence suggests that land in the developing world is being reapportioned faster than ever. Before 2008, land in the developing world was sold or leased at an average annual rate of 10 million acres (four million hectares) per year. However, in the last four years alone, nearly 148 million acres (60 million hectares) of land in Africa alone have been acquired by international investors and government bodies.

But these land deals are not just confined to the continent of Africa (which holds nearly two thirds of the world’s uncultivated arable land). In the Middle East, Bahrain has seen political upheaval and protest in the wake of a major land deal within its borders. White South African farmers are buying up land in Georgia, while in Australia a Chinese company has offered to buy 80,000 hectares of farmland. One of Asia‘s poorest nations, Cambodia has signed 15% of its land over to private companies (made easier by the Khmer Rouge’s prohibition of private property and subsequent burning of all land titles), and the Brazilian government has shown its openness to greater foreign investment in rural land.

Why the rush for land?

There are several factors driving the land grab. Population pressure is a major motivating force, as the burgeoning middle class in the Global South creates a heightened demand for foodstuffs. Food security also plays an important part – ready access to food is essential to national stability, so food security can have major political ramifications. For example in 2009 a land deal that would have handed over half of Madagascar‘s arable land to a South Korean conglomerate was met with mass protests and led to the overthrow of then-President Ravalomanana.

And it’s not just greater demand for food that is exacerbating the problem – the production of biofuels is also playing a major part. The price of corn rose 130% between January and June 2011 due to a steady rise in demand for corn-based ethanol. Rising prices encourage more farmers to allocate more land to cultivating corn, and meanwhile the price of wheat, a substitute for corn, has skyrocketed in the same period.

Contrary to popular opinion, increased grain consumption in countries like India and China has not been a major factor in creating the higher global demand and higher prices. In China and India – both developing nations with growing economies and rising per capita incomes that together make up almost 40% of the world population – grain consumption has not increased. A Food and Agriculture Organization (FAO) study on the relationship between price volatility and food security has shown that speculators have had a far greater impact on grain prices than demand from developing countries. This is especially true after the biofuels boom seen in the last decade. In fact, many of today’s land grabs are the acts of commodities speculators, working in concert with investment funds, agribusiness and government agencies.

The stark reality behind these land grabs is the displacement of long-term inhabitants, loss of livelihoods, and threat to regional food security. The speculators in today’s land grabs share a common mentality with Henry Morton Stanley, who spoke of the continent of Africa as an “unpeopled country” in the mid-19th century. Many reports on land deals erase or simply ignore the rights of the people living on the land and show a blatant disregard for customary land rights. In South Sudan, the Mukaya people are currently protesting an agreement between their leadership and the Texas-based Nile Trading and Development Inc, which leases 600,000 hectares of their land for 49 years and gives NTD unlimited land, water and mineral rights for the duration.

Findings at the April 2011 International Conference on Global Land Grabbing overwhelmingly supported the thesis that the global land grab has not been advantageous to the poor or to small farmers. The majority of land deals are linked to biofuels and industrial products rather than food production, meaning that more and more arable land is diverted away from food production. The findings of this conference will be central to policy-making at the 37th Session of the United Nations (UN) Committee on Food Security (CFS) in October 2011.

In China, around 65% of the population are farmers and migrant workers. In 2005, 30,000 Chinese protesters in the eastern town of Huaxi took part in riots over the illegal granting of land rights to 13 chemical plants, citing contamination of their soil and water supply, and an increasing number of miscarriages and illnesses. Such land deals are not uncommon in China. About 37% of 1,564 villages in 17 provinces and autonomous regions have been subject to land confiscation over the past decade. According to the Chinese Academy of Social Sciences, farmers in 60% of villages where land was confiscated reported being dissatisfied with the compensation they received.

Among the reasons for their dissatisfaction, farmers stated that compensation was too low to reap any long-term future benefit and that the government had never enquired how much compensation they wanted. Other survey respondents reported that the real market value of the land was higher than what the government actually gave them. A considerable 23% of those polled stated that their compensation money had been embezzled by local officials, while 29% reported that they could not find jobs or sources of income to make up for the loss of their land. This survey specifically targeted Chinese farmers affected by land deals, but the issues it deals with have a much broader geographical relevance. Violation of land rights undercuts regional social security.

The Case of Ethiopia

In Ethiopia, the average cost of leasing one acre is one US dollar, which is far below market price. The lack of accountability and transparency for the parties involved in these land deals is another major issue. While urbanization is changing the population makeup, land deals are still salient for rural Ethiopians who are exposed to poverty and food insecurity. The increased use of Ethiopian land for biofuels diverts land from food production, which is especially important for a country that has consistently been Africa’s biggest recipient of food aid.

As more Ethiopians become dependent on the global food market, they also become more vulnerable to fluctuations in prices. Food prices in Ethiopia have recently shot up 50%, while the Ethiopian birr has been devalued in the wake of increased demand for the US dollar and the euro (driven by an influx of food aid to East Africa for famine relief). Taken together, these factors pose a grave threat to the food security of a nation already dependent upon food aid.

Not all land deals are the same. Some are long-term land leases, others involve the transfer of land title from the state or community to investment funds, agribusiness entities or government bodies. What many of them have in common, however, is the potential to undermine regional food security through displacement of small farmers or diversion of arable land for the cultivation of biofuels, or more indirectly through devastation of the environment caused by deforestation and mining. This is particularly apparent in areas where war and political upheaval have displaced small farmers and undermined the development of agricultural infrastructure as in Somalia (where up to 66% of the land was signed away to American oil conglomerates) and Cambodia.

The big questions we must now answer are: how can we make these land deals more equitable and beneficial to indigenous people and small farmers? How can we foster greater transparency on the part of the deal-makers? How can these land deals bolster food security? And how do we regulate and prevent destruction of the environment? Only by answering these questions and changing the status quo will we find our way to a safe and fair food future.

Most recent Local Views on ‘The great land rush’