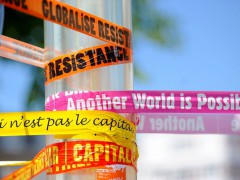 As economic globalization continues to make the world smaller, opportunities become accessible to a greater number of people, and there is optimism about achieving sustainable and inclusive growth for all. At the same time, the global economy and global markets have become so interconnected that their sheer size and complexity have become daunting. We would like to explore the dual nature of economic globalization in this Global Issue: Which new opportunities does the complex and interdependent global system afford people? Alternately, how might some people get “lost” in the system and what alternatives do these individuals see? For example:

Anti-G8 demonstration in Le Havre, France, the week-end before the G8 summit in Deauville in 2011. Are too many people lost in economic globalization? Picture published by Guillaume Paumier on Wikimedia under a CC BY license.

What do people in your country think? Do they see a crisis of statehood and of the economic systems they live in? Do you feel “lost” in economic globalization? What about your peers? Members of your community?

How do the people in your region cope with the world’s economic complexity? Do they choose to ignore it? Do they attempt to integrate their processes into global processes? Do they operate outside the markets?

On balance, do you see economic globalization as a positive force, providing new opportunities for you and your region?  Or do you instead perceive it as a negative, trapping consumers in an over-complex system they do not (or cannot) understand?

Anneliese Guess is a Project Manager at the Bertelsmann Foundation’s Washington, DC office. She joined the Bertelsmann Foundation shortly after completing a Master’s Degree in German and European Studies at Georgetown University’s Edmund A. Walsh School of Foreign Service. Anneliese's research interests include immigration, integration, demographic change, and identity.

Most recent Local Views on ‘Lost in Economic Globalization?’