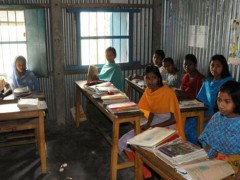 The need for quality employment in the developing world underlies the success of almost every other development initiative. Job creation has become one of the most pressing issues on the road towards fueling the economic engine and impacting complex and intertwined poverty issues such as education, nutrition, health care and housing. Without the possibility of a stable, reliable income, there is little chance for the poor to engage in sustained solutions that will improve their circumstances.

A Million per Month

Job creation, however, is only one side of the equation. A report released in December by the World Bank (WB), entitled ‘More and Better Jobs in South Asia’, says that a comprehensive and multi-sectoral policy framework will need to be implemented in order to meet the “demographic dividend” opportunity. This “dividend” is the return on the region’s swelling youth population and the opening labor market for women – South Asia has the second-lowest female participation rate in the world – that will continue to enter the workforce until 2040. The challenge will be to engage these new employees in “rising levels of productivity”, and the report warns that, “an estimated 1-1.2 million new workers will join the labor market in South Asia every month over the next few decades – an increase of 25-50% over the historical average.” This means that a million new jobs need to be added each month in order to “sustain economic growth and reduce poverty in South Asia,” says an article in The Hindu.

This chronic need for employment opportunities is seen throughout the developing world. In 2005, Africa’s youth unemployment reached 21%, higher than the world average of 14.4% and second only to the Middle East and North Africa (MENA) region’s 25.6%. Youth unemployment in Africa is a problem of alarming proportions precisely because 65% of the continent’s population is under the age of 24, with over 40% of the total population below the age of 16, and about 25% aged 15-24. According to the International Labor Organization (ILO), young people make up approximately 36.9% of the total working-age population, and three in five of Africa’s unemployed are young people.

While many developing nations have enjoyed economic growth, the benefits of that growth have not been distributed evenly and the high proportion of unemployed young people undermines further economic growth. In addition to the economic costs of youth unemployment there is also the social cost – as young people face long-term or cyclical unemployment they can become disaffected and alienated from their own communities. This can lead to higher crime rates and greater involvement in underground economic activity, as well as social unrest.

The governments of the developing world are faced with the task of creating an environment where the labor force can be expanded, upgraded and ‘modernized’ at the same time that new employment opportunities are developed. In order for this to happen, the comprehensive framework will need to address a range of issues, from infrastructure deficits to nutrition shortfalls and education gaps. “In the absence of such a framework, productivity will grow slowly or remain stagnant and the dividend will go uncashed,” says the WB report.

Nutrition, for example, is highlighted by the WB study as a major obstacle to a healthy and productive labor force. Pakistan has lower rates of stunting, underweight and wasting than India and Bangladesh, but its numbers are still higher than in sub-Saharan Africa: In Pakistan, 31% of children under five are underweight; in Bangladesh, the number jumps to 40%; and in India, it is 44%. A comprehensive nutrition program often goes hand-in-hand with an increase in school attendance and performance, and this at a time when the education system must step up to prepare students to think critically, analytically and creatively to fill spots in an upgraded job market. Moreover, given that people between the ages of 15-34 have an average of only 7.1 years of education, “There is a stark contrast between increasing demand for higher levels of education and the educational attainment of the workforce.”

It can seem all but impossible to tackle such large-scale problems, but by breaking them down into their constituent parts a real change can be made. For example, a 2008 WB report entitled ‘Youth and Employment in Africa: The Potential, the Problem, the Promise’ indicated that access to education was still a major hurdle. Looking closer it was found that school fees in Kenya and Uganda were too costly for poor families, and as a result enrolment rates were low. By eliminating school fees Kenya and Uganda were able to increase completion rates for fourth and fifth graders from impoverished families.

Another factor – particularly in rural areas – is the the proximity of schools. The cost (especially in terms of fuel use) of getting to and from school is prohibitive to many parents, but local community transport initiatives can help to overcome this problem. In short, it is possible to take small steps that help to make education accessible in the short term, and in the longer term improve the quality of the developing world’s workforce.

The Skills of Work

But even if children can get to school and are in a condition to learn once there, the developing world’s enormous jobs challenge will require an additional layer of training beyond foundational education. Skills training programs can provide tailored, specified classes to enhance the qualifications and preparedness of the workforce, particularly for the informal sector, where women and poor youth are in great demand.

While the government of Pakistan has included skills training in a number of different policy initiatives recently – casting vocational skilling as a political priority – there is a “very large gap between the government’s aspirations and the current realities,” says a UNESCO report on boosting enrollment in technical and vocational training (TVET) in Pakistan. “The TVET sector across Pakistan faces many challenges, spanning issues to do with the quality, quantity and relevance of TVET.”

In Bangladesh, while the need is imminent for a national initiative to meet the massive demand for training the poor to move them into the formal labor market, there is a need for an alternative platform for bringing together the public and private sectors, as well as NGOs, working on training initiatives. Major donor institutions such as the Asian Development Bank, WB and European Union have entered the skills training arena in Bangladesh. But they’re far from finding a satisfactory solution; “lack of adequate human resources, coupled with fragmented institutional structure, is a major hindrance in articulating consistent and cohesive policies in the domain of skills development. As a consequence, the NGOs and private sector initiatives have also become disjointed and dispersed, and lack synergies of impact.”

Initiatives such as that launched by a Swiss-based organization, Swisscontact, which aims to contribute to poverty alleviation by promoting economic and social development in Bangladesh, have been working on research and testing an enabling environment that would bring greater scale potential to the sector. One of the organization’s projects, SkillMark, focuses on developing and strengthening the market for skills development for unemployed or underemployed poor youth by piloting different business models that demonstrate market-based skills training solutions. The project was launched in January 2009 and will run through December 2013. Swisscontact says that despite a youth population (age 18-35) of 49.5 million, only 3% of the entire population in Bangladesh is enrolled in vocational training. Clearly, we have only begun to scratch the surface of this problem.

The challenge over the next few decades for developing nations is vast and complex. However, population demographics are working in favor of a successful outcome if a coordinated, sustainable and, most importantly, cross-sectoral approach is hastily implemented. As nations across the Global South grow economically we must be mindful of the fact that growing GDPs are not synonymous with shrinking levels of socioeconomic inequality. In fact, John Githongo, chief executive of Inuka Kenya Trust and chairman of the Africa Institute for Governing With Integrity and Kenya’s former secretary for governance and ethics, points out that as growth speeds up, so does inequality.

So it’s not enough for jobs to be created – they must be the right type of jobs, filled by the right type of workers. And for that to happen we need to start now, because as the WB’s report remarks, “The policy reforms required to boost job quality are desirable irrespective of the demographic transition. But the window of demographic opportunity lends urgency to the agenda, especially given that policies take time to bear fruit.”

This article was jointly produced by Arrianna Coleman and Carlin Carr. Ms. Carr is Editor of Searchlight South Asia and Manager of Knowledge and Insights at Intellecap in Mumbai, India.

Most recent Local Views on ‘Work in the developing world’