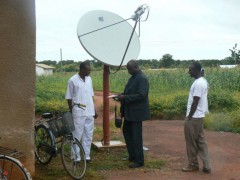 Learning with the cell phone is not especially new. Mobile learning as a concept started in the early 1970s, and in 2001 the European Commission’s Information Society Technologies Programme supported a €4.5m mobile learning project for young adults, assisting them in the development of life long learning objectives. What is truly innovative is the use and development of mobile applications with strictly limited technical resources. Notable successes have been scored on this front in Africa and many Asia-Pacific countries, raising the education levels and markedly improving the economic and social foundations of these societies. Small wonder then that industry giants such as Samsung, Ericsson, Nokia and Vodafone – to name just a few – boost mobile innovation in Africa.

Mobile technologies are crucial for internet access. The World Bank and numerous consulting firms across the globe have done their homework and come up with figures which suggest that the spread of broadband internet and education are decisive factors in fuelling a country’s economic growth. Moreover new research shows positive connections between access to broadband internet and civic and political engagement, social contacts and participation in cultural activities. Therefore, modern and progressive approaches in educational monitoring and measurement of human and social capital development, for instance the project “European Lifelong Learning Indicators” (ELLI) of the Bertelsmann Foundation or the Canadian Composite Learning Index (CLI) include indicators for “digital literacy” like internet access and usage.

A 10 per cent increase in the penetration rate of broadband internet enables an increase of up to 1.5 per cent in economic growth, which also benefits other countries and emerging market economies in Africa and the Asia-Pacific region. Figures from the Telecommunication Union (ITU) show that in 2010 these regions had some 309 million broadband internet subscriptions and no less than 3.8 billion mobile telephony agreements. In Africa alone, the mobile phone penetration rate has now reached a level of 28 per cent of the population and shows no signs of stopping.

If we turn to Kenya (East Africa) we see that 67 per cent of young people aged between 15-30 are unemployed and that 90 per cent of them have no form of vocational training whatsoever. Yet Dinah Mwinizi, director of the Department of Youth Training at the Ministry of Youth Affairs and Sports, remains confident that this situation will soon change. And mobile technology is what’s going to change it: her ministry promotes practical training courses that teach young people how to operate mobile technology and at the same time give them the skills needed to set up small businesses. As the director said in an interview in the run-up to the elearning Africa conference, young people should be encouraged to use their imagination and creativity to come up with ideas that can provide the economic base for a better life. Resource-based learning (RBL) is how Mwinzi terms this strategy for learning in the classroom and beyond, which has already successfully produced projects like a security service for critical city neighborhoods and conflict zones.

The country has convincingly shown how eager its people are to take up mobile services and how ingenious they are at using them. 2007 saw the introduction of M-Pesa, the mobile banking system. Everybody who registers with M-Pesa can do their own banking and transfer or borrow money. Millions of people now have the opportunity to participate in the economy in a way that was unthinkable beforehand – alone due to the lack of bank branches. This system has now become a role model and success story for countries all over the world and it’s not just the World Bank that considers its development as a prime example of the breakthrough of mobile technology in the education of Africa.

This is why the technology has been embraced by the United Nations as a key means of providing (primary) school education to all children by 2015 in fulfillment of the Second Millennium Development Goals. In the rural and poor areas of Tanzania – as in many other regions – there is a serious lack of schools and teachers. In 2007 the mobile communication project Bridgeit was set up, more widely known under its local name “Elimu kwa Teknolojia” (Education Through Technologies). Schools taking part in the project are given a satellite dish, TV, digital receiver and recorder and a number of cell phones. If a teacher needs a video for the classroom, she can request it by SMS, download it on the digital recorder and show it on the TV. The aim is to improve the teaching quality in classes of up to 80 pupils, to improve their abilities in subjects like maths and natural sciences and to give them practical help in their everyday lives. The figures speak for themselves: over 40,400 pupils and 1,500 teachers were reached alone in the first two years. Videos that deal with so-called “life skills” have a direct impact on the survival chances of the children by showing them, for instance, how to protect themselves from pandemics like Aids, why vaccination is so important and what strategies they can use to solve conflicts.

Playing for a better life

These are the issues also dealt with by GetH2O. This game developed by the Dutch company Butterflyworks in association with Mammabits, a Nairobi-based youth communication agency, simulates the complexity of life in the slums. It shows how the scarcity of resources like water is related to escalating conflicts. Players learn how to manage scarce resources and prevent escalation of conflicts, but also what consequences their actions can have for the community at large and for themselves personally. The cell phone version of the game was first introduced in Nairobi in January 2011, and has now been downloaded 4,000 times.

The actual learning process mainly takes place outside of the classroom – and this is an insight that has now been taken up by developed countries as well. Learning essentially means learning from practical experience in a life-long process of exchanging with others. A process that transcends generations! Evidence that shows the wider social and personal benefits of informal learning activities in this life-long perspective have recently been collected in an international review of research results,carried out by the University of London. It shows the importance of informal learning for identity development, life satisfaction, physical and mental well-being, as well as community vitality and social cohesion.

Just how beneficial mobile technology can be in aiding such life-long learning is shown by the Instant Messaging Network Mxit. Originally developed in South Africa, Mxit now has 27 million users in 120 countries. The Mxit Cares initiative turned the platform into an educational tool that students could use to set up learning groups, which give counseling on Aids and drug and alcohol misuse and encourage young people to make use of their vote in elections. The Mxit Family allows users to set up local area networks and create their own communities and public-utility organizations. As the software developer Marlon Parker says in his blog, in such ways the network has not only changed the communication landscape in many countries, but also brought about positive local-level effects. Parker is also the founder of the Reconstructed Living Lab (RLabs), a social media enterprise whose proclaimed aim is nothing less than improving the quality of life through social media. The entrepreneur from Cape Town, South Africa, sees himself as the initiator of a “global movement”, which provides an “Innovation Incubator” for young business start-ups as well as drug and HIV counseling services for Mxit and other mobile platforms and social networks.

The future of Africa is indeed “mobile”. Mobile applications for education and healthcare play a major role in all the trends that experts forecast up to the year 2020. They are the key foundation on which a more successful economic future will be built. The Western world would be well advised to keep a watchful eye on them because there is much of value they could teach us for tackling our own challenges. In the rural areas of west Europe where the population is steadily drifting away, where teachers and doctors are already at a premium and where it will be difficult to maintain the infrastructure at its present level, mobile, simple to use applications for education and healthcare offer a genuine alternative. Not to mention a modern cell phone payment system of the kind M-Pesa represents!

Journalist and author, like the idea of "education for all" and the inherent chances of learning technologies like the internet, mobile phones and other devices.