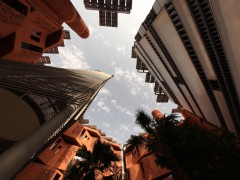 Cities are our future. The United Nations Population Fund predicts that by 2030 almost five billion people – equivalent to more than 60 percent of the world’s population – will be living in towns and cities. Our biggest cities – the so-called ‘megacities’ with more than 10 million inhabitants – are growing in size and influence by the day, and the result is a brave new world shaped by both careful urban planning and ad hoc experimentation.

Our mass migration towards cities means that we need to get large-scale urban living right. That’s easier said than done – the infrastructural challenges alone are formidable – but cities have always been places of innovation, and as people travel to them from all over the world, they bring with them ideas that will redefine urban living.

Some of the most ambitious plans for city living are being seen across Asia and the Middle East, where planning organizations are working in conjunction with private enterprise to deliver genuinely groundbreaking results. Take, for example, Masdar City, a development located 17km from downtown Abu Dhabi that is being designed from the ground up in response to the very specific problems presented by building a city in the desert. All cities require huge amounts of energy to either heat or cool their buildings, but in the extreme temperatures of the Arabian Gulf, that becomes an even more pressing problem.

Yet Masdar City aims to establish itself as one of the most sustainable cities in the world, home to around 40,000 residents and hundreds of businesses in a high-density, pedestrian-friendly environment, their energy needs met almost entirely by solar and other renewable sources. It’s an ambitious plan and is effectively an experiment being conducted by Masdar, one of the world’s commercial leaders in renewable energy, working in conjunction with the likes of the Massachusetts Institute of Technology, General Electric and Siemens (which plans to establish an award-winning Middle East headquarters there). The development’s planners want to make Masdar City a hub of renewable technology, bringing skilled workers from across the Middle East and beyond to create a new center of international talent that will then export its ideas around the globe.

But even if Masdar City does succeed in filling its homes and opening its businesses, it will be the exception rather than the rule. We can’t just start from scratch and build a new city every time we need to address urban challenges, and it would be a mistake to assume that advances in technology will always allow us to wave a magic wand over our cities to solve their problems. Often the most interesting solutions are far more low-key, and depend more on integrated incentives than on bold new buildings.

Green Roofs for Healthy Cities is an American organization working to provide food and increase social cohesion in cities by encouraging residents to establish gardens on the roofs of their buildings. As cities get bigger they need to expand outwards, often into the farmland that was once used to feed their citizens. The rise of international supply chains mean that by and large we don’t notice this change – as long as our supermarket shelves are stacked, most of us don’t pay too much attention to where the food came from. But as our cities become ever more separated from their food sources, worrying issues of food security are beginning to arise, with some cities becoming almost entirely dependent on produce that has been flown in from hundreds, even thousands of miles away.

Launched in 1999, Green Roofs attempts to raise awareness of this troubling development and demonstrates the economic, social and environmental benefits of growing food within the city. By working with local government, Green Roofs is able to incentivize change; Washington DC, for example, saw a leap in urban gardening back in 2009 when the city introduced tax subsidies for rooftop gardeners. The opening of another green roof pales in comparison to the giant leaps being made at Masdar City, but both demonstrate the ability of cities to bring together individuals and ideas that can effect real change.

The transplantation of ideas between the world’s cities can help steer us towards the peaceful and prosperous future we all want, and several organizations are springing up to make the transfer of ideas easier and more successful. Cities of Migration is led by Canada’s Maytree Foundation and includes input from several global partners, all dedicated to encouraging the movement of people and ideas between the world’s cities. But as Claudia Walther, the Bertelsmann Stiftung representative on Cities of Migration explains, the process is as much about changing ideas as preserving them:

“Every city has its own conditions, so if you adopt a good idea you have to find your own way to make it work. For example, Toronto has a diversity monitor that we’re very impressed by. We want to establish something like that in Germany, but in Toronto it’s set up for visible minorities [people with physical characteristics, like skin color, that mark them out]. That makes sense in Toronto but it would be no good in Germany, because we have a totally different picture of migration. In Toronto they have lots of people from Asia, lots of people from Africa, whereas in Germany the biggest migrant group comes from Eastern Europe and the second-biggest from Turkey, so this question of visible or not visible doesn’t make sense for us.”

Globalization means that now more than ever, cities are in competition with each other – competition for business, resources and, thanks to the ease of migration, for people too. In the case of a bold new project like Masdar City, the objective is clear – it must find a way to keep the air-conditioning units running or its new citizens will soon leave their shiny new homes. In older, more established cities it’s harder to see the struggle for survival, but it’s there nonetheless. The challenge, then, is to do what the city has always done best – bring together people and businesses in an environment where they can settle and flourish. The reality of achieving that is very different in the slums of Mexico City and in the old industrial centers of Western Europe, but the principle remains the same. The cities with the best people win.

Steven Watson is head of customer publishing for publishing company The Church of London. He works with corporate clients including Google, PlayStation and Volkswagen, and happily describes himself as a magazine enthusiast.

Most recent Local Views on ‘The new city’